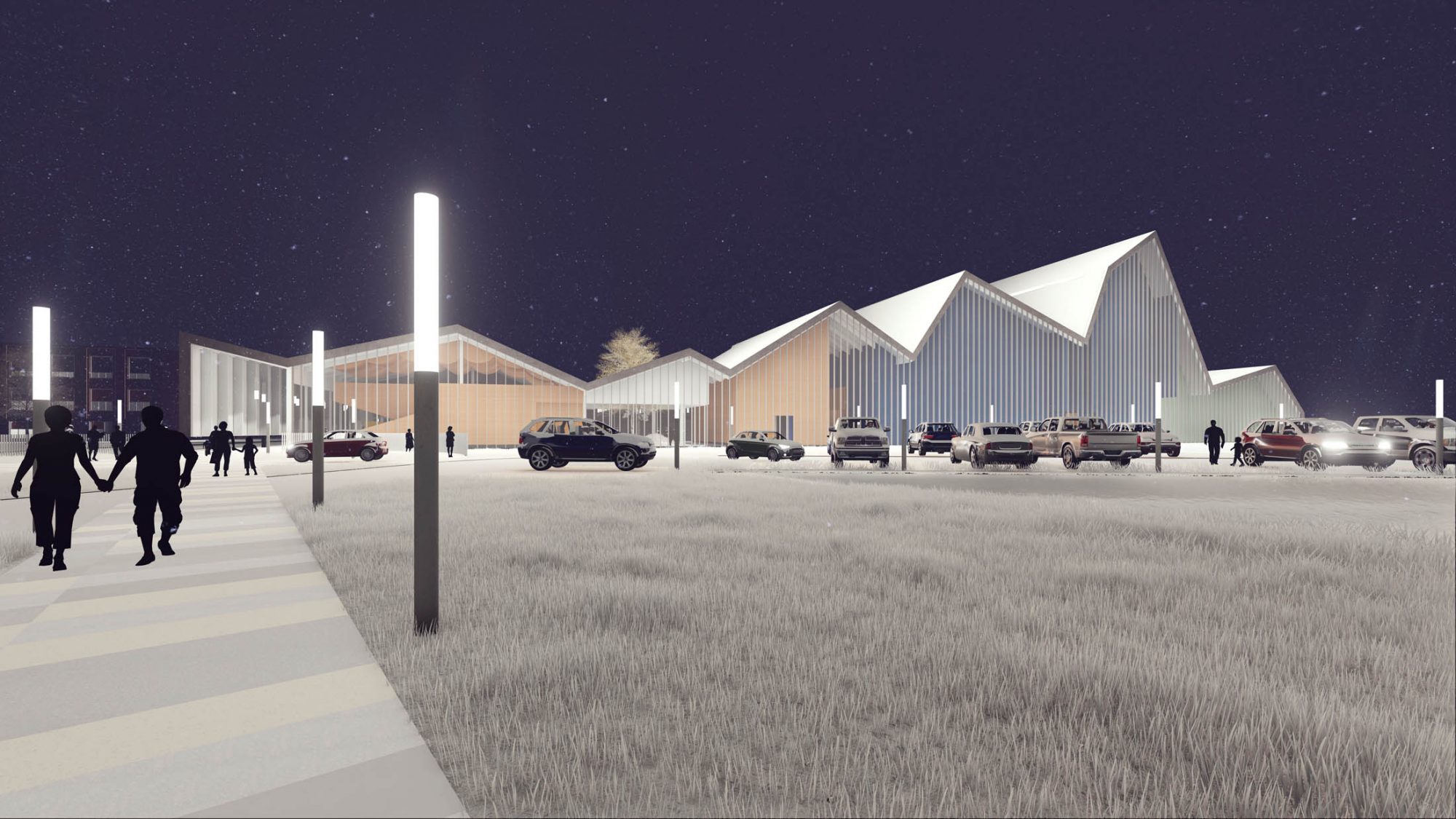 Peter MacKeith, the dean of the FJSAD. Photo: Beth Hall

As the mass timber construction industry takes hold in Arkansas, Peter MacKeith looks on like a proud papa.

MacKeith, the dean of the Fay Jones School of Architecture & Design at the University of Arkansas at Fayetteville since 2014, was an early advocate for establishing and growing a mass timber industry in the state. In the early going, he may well have been the only advocate, but thanks to his relentlessness, mass timber looks like an industry with a future in Arkansas.

The mass timber industry’s evolution from vague European concept to prominence in Arkansas was capped when Walmart Inc. of Bentonville announced in September 2017 that its new multimillion-dollar 350-acre home office campus would use mass timber as the main building material. In December, Structurlam Mass Timber Corp. of Canada announced it would open a production facility in Conway, where one-third of its capacity would be designated for the Walmart project.

“These types of initiatives take a long time to come to fruition, and they take a lot of people in collaboration,” MacKeith said. “They also take necessarily multiple perspectives and motivations. I want to be very clear: I’m happy if I’m seen as an advocate. In many ways, I have found an untapped potential across the state for this approach and this initiative.”

MacKeith became a diehard believer in mass timber during the decade he spent at what is now known as Aalto University in Finland. Mass timber as a construction material has been growing in popularity in Europe for the past couple of decades.

When MacKeith arrived in Fayetteville it didn’t take him long to recognize the similarities between Finland and Arkansas. Finland has a couple million more people than Arkansas but the terrain of both is about 60% forestland.

First, he convinced the Architecture School to teach wood design classes. Then he convinced the university to use cross-laminated timber (CLT), the most notable product under the umbrella of mass timber, in the construction of an $11 million, 27,000-SF library storage facility in 2018.

The library storage facility was the first building in Arkansas to be built using CLT. Later, the university used CLT in its $79.6 million Adohi Hall, a 200,000-SF, five-story student dorm.

Those construction projects drew the attention of Walmart.

What Is Mass Timber?

Mass timber is a catch-all term for structural wood laminates covering all the different components of a construction project: walls, floors, ceilings, etc. CLT, in simple terms, is a panel made of three, five, seven or nine planks glued together in a stack; the result is a strong but still lightweight building material.

The panels are manufactured off-site according to the building design and arrive at the site, ready to assemble. That results in shorter construction times and less material waste.

Timber products seem a perfect fit for Arkansas, with its abundance of pine forests in the southern half of the state. MacKeith’s early advocacy got him a meeting with Arkansas Gov. Asa Hutchinson and now-Commerce Secretary Mike Preston.

MacKeith’s presentation convinced Hutchinson to give the dean $10,000 to host a mass timber seminar in Little Rock in August 2016. Steve Anthony, the president of Anthony Timberlands in Bearden, attended the seminar with the cynicism he had honed in his long business career.

“I go to a lot of seminars where products are pushed; 95% of them are garbage,” Anthony said. “You go in skeptical and you look over the information. You don’t pay a lot of heed. When it builds a little steam and things start happening on the ground, you take notice. When you start seeing things actually being done at the university, that is a wake-up call that, hey, this is not just talk.

“Throughout the whole process, Peter was just relentless.”

The major challenge, as everyone knew, was getting a production plant to set up shop in Arkansas. The state produces plenty of timber, but the only mass timber manufacturing facility in the U.S. at the time was in Oregon. (One has since opened in Alabama).

Cross-laminate timber panels are growing in popularity in construction. They were the main component of Adohi Hall, a 200,000-SF residence hall for UA students in Fayetteville. (Beth Hall)

The CLT panels the UA used in its construction projects came with hefty shipping costs from Austria, so the importance of opening more U.S. facilities was obvious. But would anyone want to invest in a major facility before the mass timber market was fully formed?

Preston said it took the state about two years of work before Structurlam announced it would invest $90 million in a new Conway facility. The state is providing several tax and work incentives, and Hutchinson put in $1.5 million from his Quick Action Closing Fund.

“The problem with a product like this is when you’re the first in and build a plant to start manufacturing it and there is no market,” Anthony said. “That is the beauty of the Structurlam-Walmart deal: the ability to have a guaranteed market for a new product that otherwise you’d really be rolling the dice.”

Structurlam CEO Hardy Wentzel said his company had been looking for a U.S. location to expand, and Arkansas was a perfect fit because it has the natural resources nearby and is centrally located.

“We currently do about two-thirds of our business in the U.S.,” Wentzel said. “Getting awarded the Walmart campus project was a big motivation for us to put our production facility in Arkansas.”

“We are going to be collaborating a lot,” Wentzel said. “The students who go through his faculty will be inspired to work with mass timber, and Structurlam will be an obvious career opportunity for some of these graduates. I think we will be very well positioned to keep this mass timber revolution going in North America.

“The stars aligned. It is not like Peter and I sat in a corner and devised a master plan how to do this. It is like-minded people getting together and moving forward.”

MacKeith said he believes Arkansas has the capacity to have multiple mass timber production plants.

“One of the great, great challenges in advancing in new wood products is convincing people there is a market for them,” MacKeith said. “It’s the chicken-and-the-egg syndrome — I’d be happy to invest but I need a market; unless you invest there won’t be a market. It has been this kind of teeter-totter for a while.

“If Walmart enters a market and makes a statement, they are indicating their belief and commitment to a market. If Walmart decides a widget is the product of the future, that widget will have a market rather quickly. We could put 100 CLT plants in Arkansas and we still wouldn’t be touching all the surplus that we have, but we have to get started.”

‘He Was a Pioneer’

Preston said MacKeith’s work behind the scenes was instrumental in advancing the industry. MacKeith got the university to build with CLT panels, which got Walmart interested, which allowed the state and Structurlam to make a connection.

“He should take more credit because he was a pioneer for this,” Preston said. “Without him, we would not have been able to get the success we did with Structurlam. I can’t begin to say enough about Peter and the work he has done as the dean, but also the push he has made for the CLT industry in Arkansas.

“We obviously are a wood-producing state and we have an abundance of timber resources. Any time you can find a new technology to utilize our timber it is going to benefit Arkansans.”

MacKeith’s advocacy led to John Ed and Isabel Anthony pledging $7.5 million for the Anthony Timberlands Center for Design & Materials Innovation at the Fay Jones School. Steve Anthony, John Ed’s son, said that donation was all because of MacKeith.

“I can’t say enough good things about Peter,” Steve Anthony said. “The contribution our company made was 100% because Peter was involved. I would certainly do anything in my power to make sure the powers that be up there know they’ve got a real jewel in Peter.”

MacKeith said his motivations to push for mass timber in Arkansas were his belief that the university represents the entire state and Fay Jones’ legacy of creating famous wood-based works.

“I tell my students this is what we do in design and through design: We actually are able to look at the world in different ways and value what is undervalued,” MacKeith said. “Wood is a common material; we reimagine it into gold, truly something that is of superior societal, economic and environmental value. I was initially surprised no one had seen this before but, at the same time, this is just how I see the world.

“It just takes perseverance and inspiration to make this what it has become.”