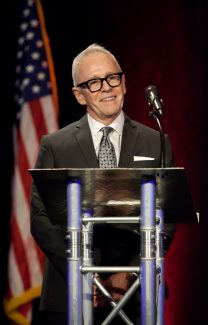 A native of Morrilton, John enrolled at the University of Arkansas in 1966 where he received Bachelor of Architecture and Bachelor of Arts degrees in 1971. He married Mary Wilson in 1969, and they have two children, Amy and Wilson, who both now reside in Arkansas.

In the early 1980s, he cofounded Allison Moses Redden (now AMR), a multidiscipline firm that helped develop the River Market district. Early in his career he became involved in AIA, and in 1987 was awarded the Dick Savage Memorial Award “in recognition of notable contribution to the chapter and significant service to the profession.” In 1996, he founded Allison Architects, now Allison + Partners, and served as president of AIA Arkansas in 1997.

In the 22 years at Allison + Partners, John and his firm consistently received awards for design excellence on both state and regional levels. Most recently, Allison + Partners received the 2017 AIA Gulf States Region Award for the Faulkner Performing Arts Center at the University of Arkansas Fayetteville.

Retiring from his position at Allison + Partners in 2017, John is now a full-time painter. His paintings have been placed in private, institutional and corporate settings, including the Central Arkansas Library System, the Bank of America Plaza and Uniti, Inc., in Little Rock.

The Gold Medal Award is aptly named after the late Fay Jones, FAIA, whose work encompasses and embodies all the qualities AIA Arkansas admires in an architect and a person. It represents his excellence as well as those who receive this prestigious award.

The award recognizes an individual architect who demonstrates touchstones of excellence through artistic vision and design, leadership and service to the state of Arkansas and the AIA Arkansas Chapter. Excellence is measured not only by the mark of architectural and individual achievement, but through the esteem and regard held for the architect by professional practitioners and the community as a whole.

Other chapter awards presented at the convention included:

Emerging Professional Award – Brandon Ruhl, Taggart Architects. He is a graduate of the Fay Jones School of Architecture at the University of Arkansas. This award recognizes a new professional who has expanded the role of the architect through civic participation and professional mentorship, thereby representing the goals of AIA to a larger audience.

Award of Merit – Steve Clark, entrepreneur and startup investor and advisor. In 2013, he founded Noble Impact, an education venture in partnership with the University of Arkansas Clinton School of Public Service. In 2015, Clark founded 64.6 Downtown, an organization creating vibrant spaces in downtown Fort Smith through creative place-making, art and culture, and community development. He founded Future School of Fort Smith in 2016. In the Arkansas business community, he is probably best known for co-founding Rockfish, an award-winning digital innovation firm. In 1999, he founded Propak, a transportation and supply-chain management company that now employs more than 1,500 people. The award recognizes individuals and public officials that through interest, activity and concern with the profession of architecture have advanced the cause of good planning and design and/or contributed to the dignity and value of the architectural profession.

Diversity Award – Alex Foundation. Angela Courtney is the executive director of Alex Foundation, which she and her mother established in 2010 in memory of their beloved Alex, who majored in architecture. A licensed contractor, Courtney volunteers to help low-income elderly residents access funding to renovate and repair their homes. The Alex Foundation’s STE+AM (science, technology, engineering, architecture and math) is offered to students in the Arkansas Delta and Central Arkansas throughout the year at no cost to the schools. The Foundation collaborates with the Fay Jones School of Architecture at the University of Arkansas to provide middle school and high school students with an on-campus summer design camp experience.