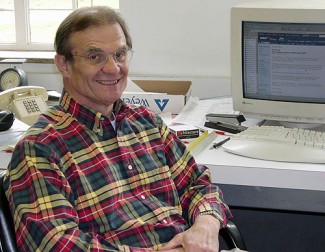 FAYETTEVILLE, Ark. – Jerry Don Wall, 75, professor emeritus of architecture at the Fay Jones School of Architecture, passed away Sunday, May 24, at his home in Rogers.

A memorial service will be held at 10 a.m. Friday, May 29, at Rollins Funeral Home, 1401 Hudson Road, in Rogers. Burial will follow at Martin Cemetery on Larue Road, also in Rogers.

At the time of this retirement in 2013, Wall was the longest-serving faculty member in the Fay Jones School. He taught 40 years of both core curriculum and elective courses, and every student who went through the architecture program in those four decades was educated by Wall.

“On behalf of past and present students, staff and faculty of the Fay Jones School, I want to express our sadness at Jerry’s passing,” said Jeff Shannon, professor of architecture and former dean.

“Jerry was a good colleague and friend of mine for all 36 years of my career here. I had the pleasure of teaching with him and working on several projects with him. He was the consummate professional, and his presence will be missed by those who have worked with him,” Shannon said.

Wall, a native of Oklahoma, received a Bachelor of Architecture from Oklahoma State University and a Master of Science in civil engineering from the Massachusetts Institute of Technology. He then worked as a structural engineer for two Houston firms, Caudill Rowlett Scott and McDonnell Automation.

Throughout his career at the Fay Jones School, Wall taught all five courses in the school’s required technology sequence, focusing primarily on the structural aspects of design. Each year, he also taught an advanced structures seminar in which students researched, wrote and presented papers on topics related to technology, materials or methods.

Wall consistently taught second- through fourth-year architecture students. In addition to his lecture classes, he frequently also consulted with students in studios on their projects. With that one-on-one work, he helped students determine what the best structure would be for their designs.

Wall’s research interests included structural design for extreme environments, and he kept in contact with many former students over the years. His former students developed exercise equipment to combat microgravity stress on astronauts and designed a habitat for Mars, presenting their work to NASA employees at the Johnson Space Center in Houston.

Wall was particularly fond of sailing, woodworking, his dogs and family. But his most cherished activity revolved around handball.

His wife, Suzanne E. Wall, also served the University for many years, retiring in 2011 from The King Fahd Center for Middle East Studies.