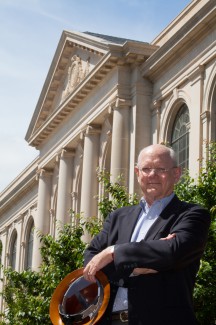 Jeff Shannon, former dean of the Fay Jones School of Architecture (2000-2013), has devoted most of his career to practicing and teaching architecture in his native Arkansas. Educated at the University of Arkansas and Rice University, he has won numerous teaching awards, including the Master Teaching Award (1993) and Outstanding Teacher Award (1997), both from the school of architecture, and the University of Arkansas Teaching Academy Award for Outstanding Teaching in the Category of Creativity (1992). As Professor of Architecture, he continues to teach design studio and popular courses on the history of urban form and design thinking.

As dean, Shannon developed new programs to foster leadership and life skills among students and to enhance diversity within the school. During his tenure, the school was nationally ranked several times, rising as high as 8th best of public university programs.

In 2009, he co-founded the publishing collaboration between the Fay Jones School of Architecture and the University of Arkansas Press and continues to serve as executive editor. Recent publications include Architects of Little Rock: 1833-1950 by Charles Witsell and Gordon Wittenberg and Of the Soil: Photographs of Vernacular Architecture and Stories of Changing Times in Arkansas by Geoff Winningham.

In addition, he helped raise over $63,000,000 during his tenure as dean, including the funds needed to name the school after Fay Jones and to renovate the home of the school, Vol Walker Hall, and to build an addition, the Steven L. Anderson Design Center.

Shannon was chosen as one of the “25 Most Admired Educators” of 2011 in the November/December 2010 issue of DesignIntelligence, a national bi-monthly report of the Design Futures Council.