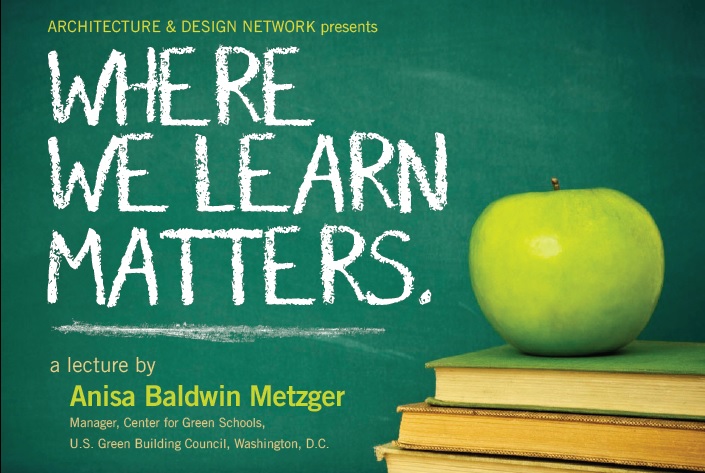 As School District Sustainability Manager for Green Schools at the U.S. Green Building Council (USGBC), headquartered in Washington, D.C., Anisa Baldwin Metzger, oversees a  national effort that  provides guidance and support for the Council’s state subsidiaries and their sustainability efforts. Here in Arkansas, the state USGBC hosts the Arkansas Green Challenge (AGC), a program that pairs mentors – architects and engineers among them – with students and staff to find ways of greening their schools. Now in its fourth year, the Arkansas AGC has reached  eighty schools and more than forty thousand students, helping them understand the influence of school facilities design on matters relating to learning, health and the environment.

Ms. Baldwin Metzger, who grew up in Little Rock, received a B.S degree in architecture from Washington University, St Louis and earned an M.Arch from the University of Washington, Seattle. Following the devastation of Hurricanes Katrina and Rita, she worked in New Orleans, helping schools rebuild in ways that reflected their commitment to USGBC’s  principles of greening.  Drawing on her own experience, she asserts that “the pursuit of environmental sustainability requires that we utilize design thinking to deal with many complex problems our world faces”. In her talk, she will share strategies for working with schools and school districts throughout the country to develop ways of insuring sustainability.