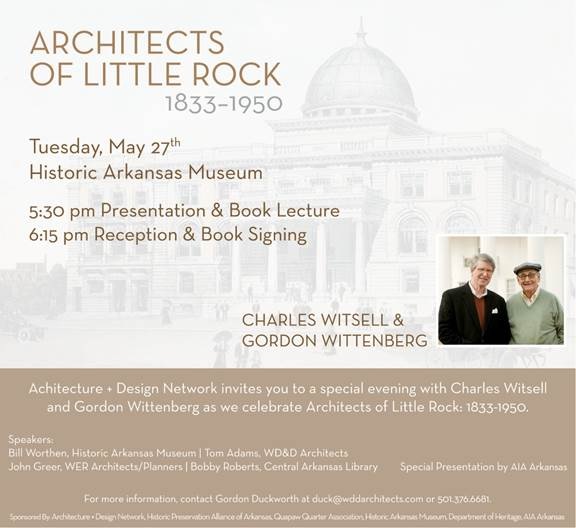 “Little Rock as a city of today is also the city of a hundred years and more ago. Nowhere is this more obvious than in its architecture.”

On May 27th, the Historic Arkansas Museum will be hosting a lecture and book signing for the recently released Architects of Little Rock: 1833–1950, penned by Little Rock architects, Charles Witsell and Gordon Wittenberg. The evening will begin at 5:30 with a special presentation and lecture discussing the book. Speakers will include Bill Worthen, Historic Arkansas Museum; Tom Adams, WD&D; John Greer, WER Architects/Planners; Bobby Roberts, Central Arkansas Library and a special presentation will be given by AIA Arkansas. A reception and book signing will begin immediately following the lecture. All are invited to attend this special evening.

“There are many ways of knowing the built environment. In their Architects of Little Rock, Mr. Witsell and Mr. Wittenberg explore the always complex relationship between buildings and the visionary thinkers—sometimes ordinary craftsman—who produced them. In so doing, they not only have uncovered the design rationales and circumstances of production that influenced a wide spectrum of Little Rock architecture but moreover have written a significant work of architectural scholarship that addresses the history of the architect’s profession,” Ethel Goodstein-Murphree, architectural historian and professor of architecture, University of Arkansas.

Architects of Little Rock: 1833–1950, is being released this month. The book is co-written by Little Rock architects, Charles Witsell and Gordon Wittenberg and edited by Marylyn Jackson Parins. Architects of Little Rock provides biographical and historical sketches of the architects at work in Little Rock from 1833 to 1950. It is the story of the people behind the city’s most important buildings. Thirty-five architects are profiled, including George R. Mann, Thomas Harding, Charles L. Thompson, Max F. Mayer, Edwin B. Cromwell, George H. Wittenberg, Lawson L. Delony, and others. Readers will learn who these influential professionals were, where they came from, where they were educated, how they lived, what their families were like, how they participated in the life of the city, and what their buildings have contributed to the city of Little Rock. Famous buildings, including the Historic Arkansas Museum, the Old State House, the Arkansas State Capitol, St. Andrews Cathedral, Little Rock City Hall, the Pulaski County Court House, Little Rock Central High School and Robinson Auditorium are showcased, bringing attention to and encouraging appreciation of the city’s historic buildings.