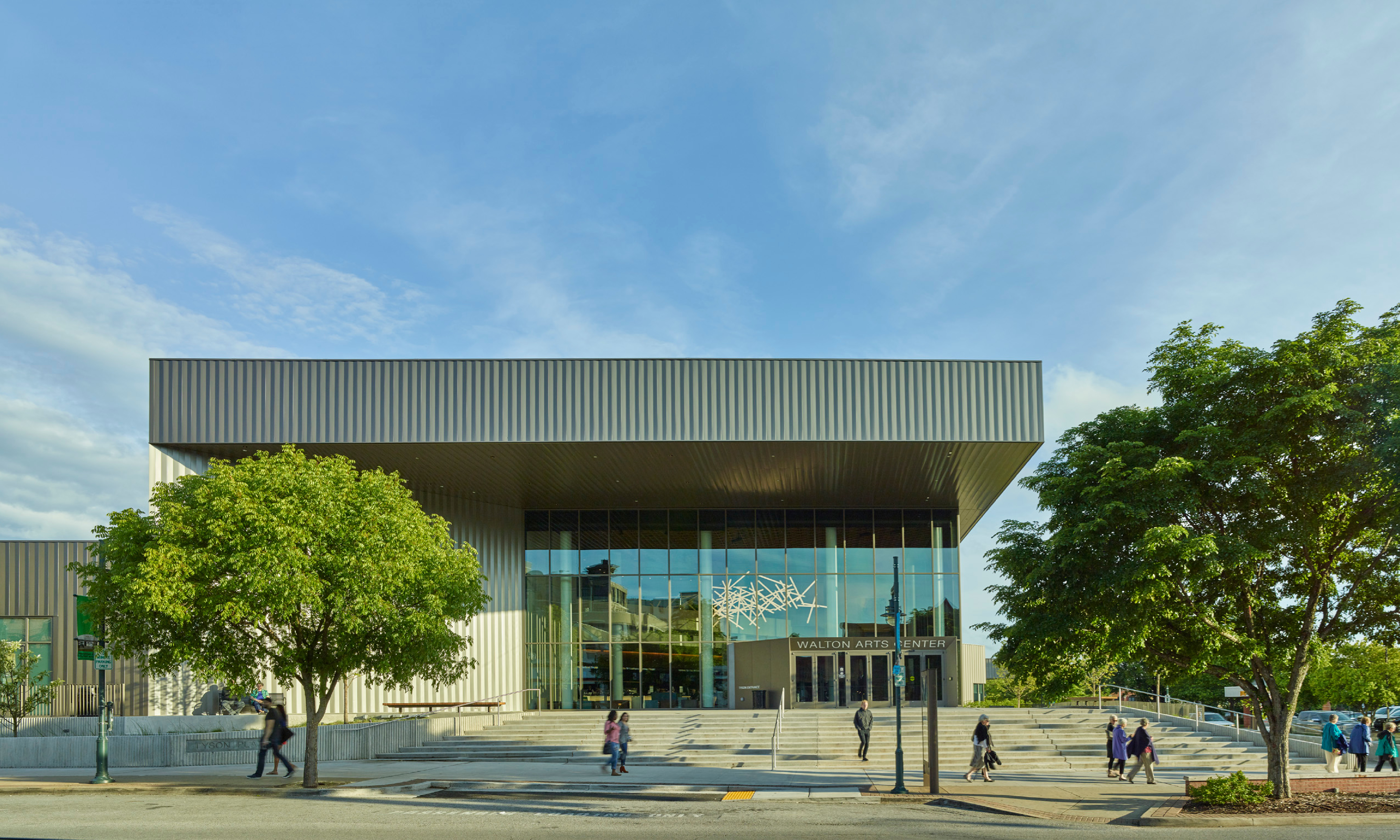 A beacon for the arts in Northwest Arkansas, the Walton Arts Center hosts four resident ompanies and brings a wide variety of touring artists and performances to Fayetteville annually. The original design, completed in 1992, set the building at a 45 degree angle to adjacent streets, separating the facility from the street life of downtown Fayetteville and creating
awkward access routes for patrons. The original architecture, with its heavy brick façade and dark tinted glass, revealed little of the activity happening inside. Additionally, significant attendance growth over the last two decades had strained the existing facility’s lobby, performance, backstage, administrative, and public spaces, driving the program for expansion.

The new design creates a dramatic transformation of the Walton Arts Center public identity. The expanded lobby and cantilevered porch re-orient the building to Dickson Street, creating a prominent front entrance on the city’s main entertainment boulevard that both welcomes the public and plays host to outside events throughout the year. A glass façade reveals the activity of the new double height lobby and showcases a large custom chandelier that is visible even from a distance. As a significant portion of the exterior was to remain brick, the addition’s warm grey pleated metal skin offers both a complimentary hue, pulled from the existing mortar
color, and a textural contrast to the original building. This material choice also lends a lightness to the 25 ft cantilevered porch. The addition reconciles the skewed geometry of the original building with the orthogonal geometry of the street grid with a series of folds in its planer design.

Inside the lobby, a central wood-clad staircase reinforces the connection between the main floor and the balcony above and draws
the eye to the custom wood ceiling whose triangular pattern provided the necessary openness and flexibility to accommodate
theatrical and AV technology mounted above it. Interior finishes including this wood screen, detailed wood paneling, and faceted and
integrated signage pay homage to the region’s respect for craft and natural materials.

Anchoring the lobby is a custom 50-foot long monolithic, faceted, service counter. Internally illuminated, it provides a moment of surprise, while its power and data capacities, coupled with flexible electronic signage, allow a variety of patron services – ticket will call, coat check, concessions – to be optimized along the length of this space. The counter’s sculptural quality adds a further sense of refinement when it is transformed for social events into a banquet table. At the rear of the lobby, two 13-foot sliding doors, clad in back painted glass, conceal the utilitarian space and equipment necessary for robust concessions sales.

The design also realized the full potential of Starr Theater, previously hidden at the rear of the building and closed over 100 days annually in order to accommodate the overflow backstage needs of the larger Baum Walker Hall. The addition incorporated a significant new entrance on West Street giving this venue its own identity, while new pathways and landscaping re-inforce a
circulation route from the main entrance around the corner. In addition to increasing the seating and expanding Starr Theater’s technical capacity, the design added aesthetic refinements – including new wall panels and a window onto a nearby park ¬– to transform what was a spartan black box space into a multi-purpose venue that can host daytime performances and formal evening events. Additional dressing rooms and expanded support spaces now allow Starr to operate independently from Baum Walker Hall, making it possible to fully program the space throughout the year.

Further backstage upgrades dramatically improved functionality for staff and crew. Taking advantage of the higher grade of the site behind the stage, the design included a large, high-ceilinged basement under a new two-story administrative office building, which now houses workshops, costume and instrument storage, laundry facilities, and a crew lounge. The new basement connects these spaces directly to the stage-level of the theaters, easing the operation of the venues during multiple rehearsals and performances.