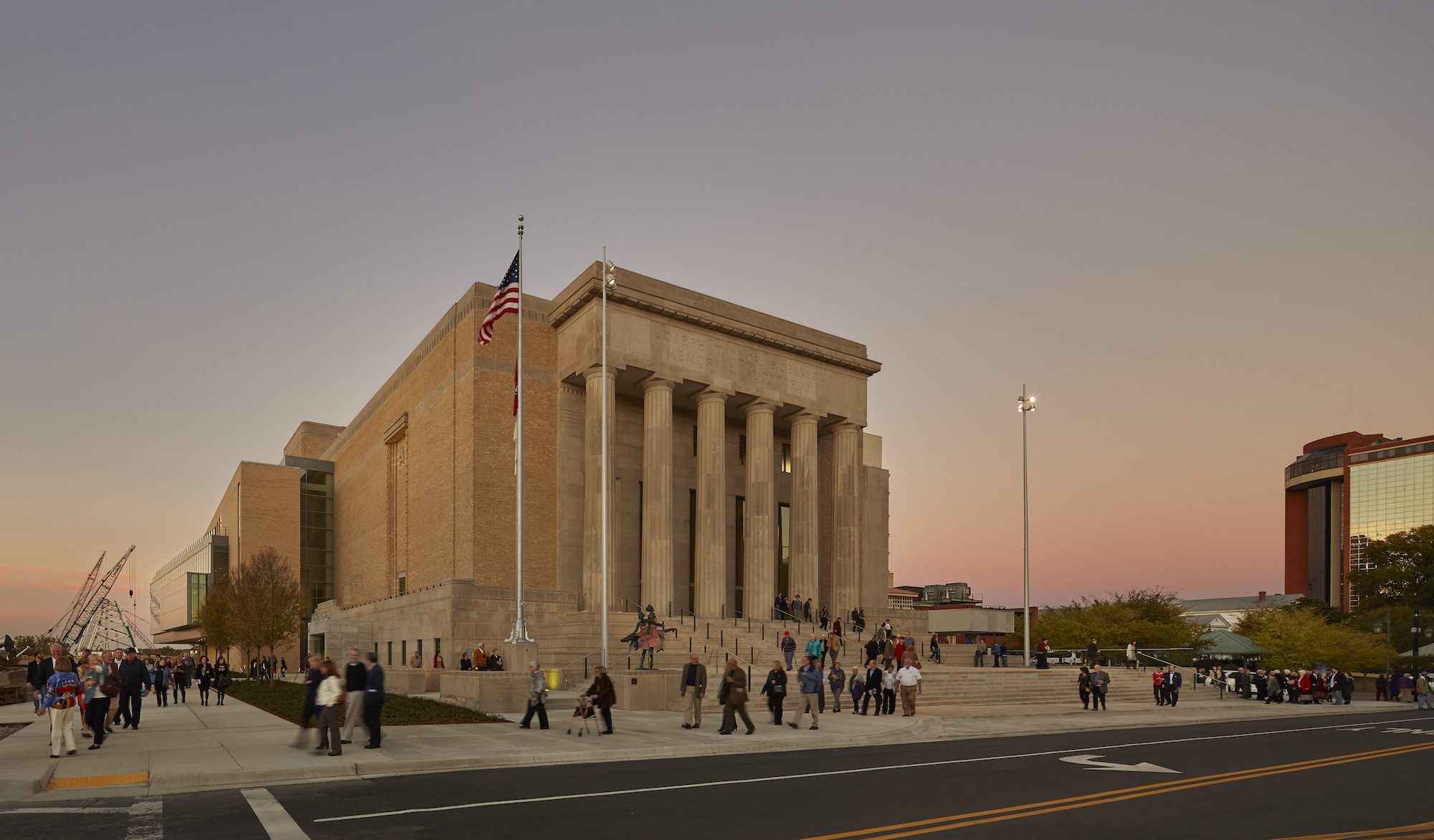 The complete renovation and expansion of the Robinson Center dramatically reimagines the beloved historic landmark as a state-of-the-art performance and conference venue, poised for the future. For over 75 years, this multi-use venue located in downtown Little Rock welcomed visitors to experience every type of entertainment—including the first live recording of “Hound Dog” by Elvis Presley in May 1956. Today, the redesign of the hall “breaks the fourth wall” and extends the audience experience past the stage, inviting the community into the building’s transformed public spaces, out onto the new public plaza and extending Robinson’s impact throughout downtown Little Rock and beyond, reinforcing its role as a civic icon. Whereas the Robinson once turned its back to the river, it today presents a transparent face to the city and actively participates in its ongoing development, promoting a visual connection to the riverfront greenway.

Originally completed in 1939 as part of the WPA New Deal Campaign, Robinson was added to the National Register of Historic Places in 2007. As such, the building’s exterior and historic lobby has been restored and the essential character of the landmark building enhanced. Beyond the historic lobby, modern interventions provide a dramatic reinterpretation of the original Art Deco elements. All of the interior spaces have been rethought and reconfigured in order to resolve a number of functional shortcomings and provide contemporary patrons with all the conveniences and modern amenities they have come to expect.

Adjacent to the historic lobby, a multi-tiered, soaring central new lobby is defined by a dynamic, curvilinear wall and a grand central staircase, both dramatic points of focus and orientation. Inside the house, the auditorium’s original design was a long, low rectangular box and far from acoustically ideal. The decision to drop the new performance hall stage 36’ into the former exhibit hall space below dramatically increases the hall’s acoustic volume. The back wall of the house has been brought forward nearly 30’ closer to the stage and new box seating has been added to dramatically improve patron sight lines and provide a more intimate theater experience. A sculptural ceiling and Art Deco-inspired, forward-leaning faceted interior wall panels and wood balconies further enhance the acoustic and visual environment and draw focus towards the stage.

The new Robinson Performance Hall contains 2,214 seats on two tiers, with box seats and an orchestra level. Stage lifts extend the stage for symphonic performances, further enhancing acoustics and the connection to the audience. The expansion of the performance hall also addresses several other “back-of-house” deficiencies and significantly expands the theatrical and musical offerings now available to the people of Little Rock. Improvements ensure that Robinson is now “Phantom-ready,” with the previous-lacking capability to handle the largest and most complex Broadway touring shows and concerts.

The Robinson Conference Center is relocated from its original windowless lower level meeting spaces to the north end of the building. A two-story, glass-and-steel addition houses a dramatically improved meeting and flexible event space accommodating 530 people and four new meeting rooms above with direct access to a 5,477 square-foot-terrace – all presenting a new public face to downtown with stunning views towards the Arkansas River and beyond.

The creation of a new public plaza integrates the building with the continued development of the riverfront greenbelt, engaging pedestrians and bikers as they pass over the new Broadway Bridge, connecting to the hall’s Broadway entrance. The replacement of a parking lot and relocation of a loading dock to an existing service drive one floor down creates a new public space on the west side of the building, activating an important corner in downtown Little Rock, defined by City Hall and the Broadway Bridge.

The city now boasts two iconic cultural buildings that signify the revitalization of downtown Little Rock. The Robinson anchors the arts and entertainment district to the west and is bookended on the east by the William J. Clinton Presidential Center and Park which became a major catalyst for Little Rock’s “Decade of Progress,” and culminating in the city’s galvanized civic effort to transform their cherished Robinson Music Center into a venerated icon for the future.