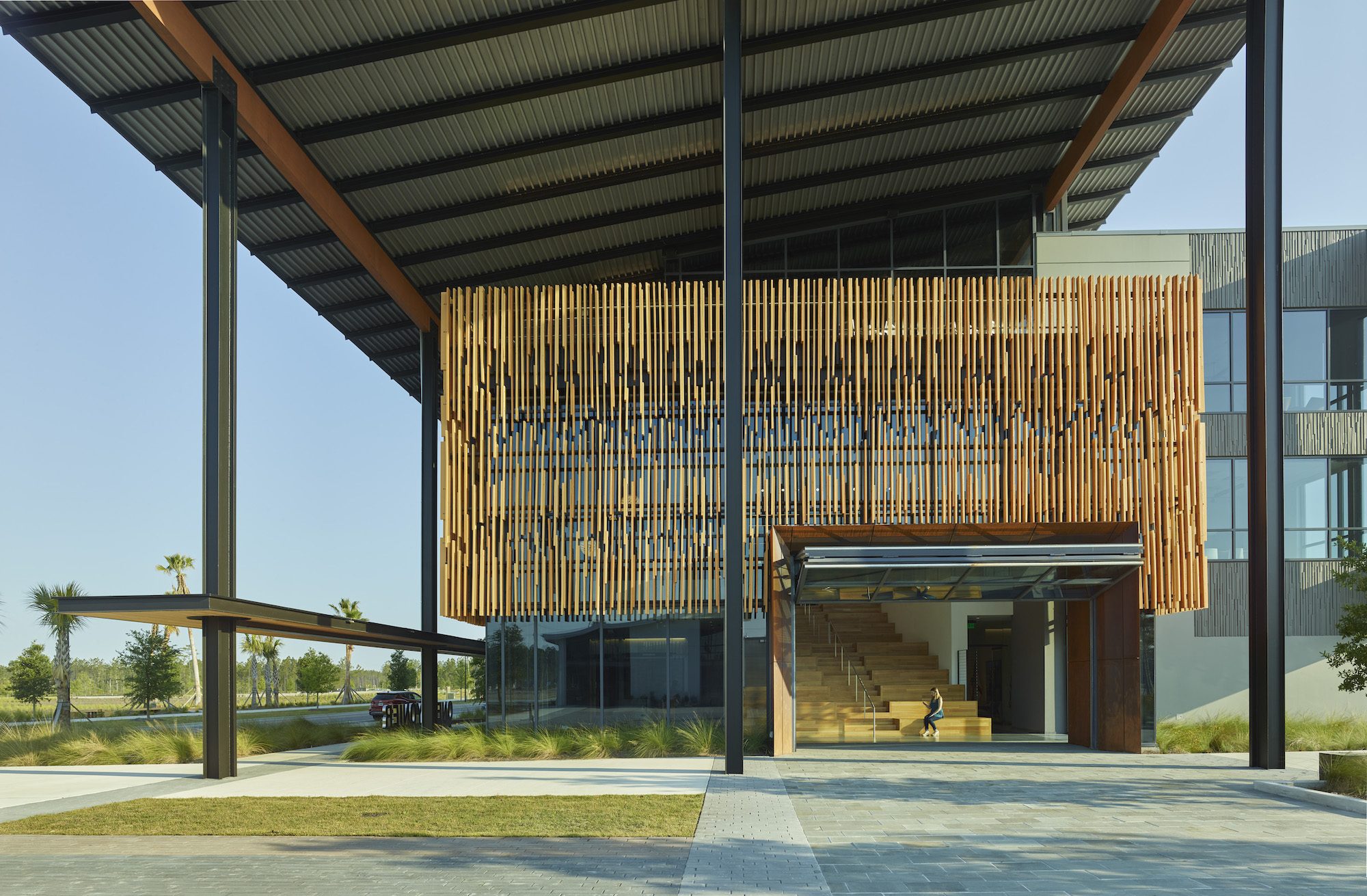 When Rayonier decided to allow a key land holding to be developed into a township called Wildlight, Florida, the company also determined its headquarters could be its centerpiece, expressing commitment to the region while consolidating three separate office locations spread from Jacksonville to Fernandina. Located ten miles inland from the Atlantic east coast and just seven miles from the Georgia border where palms meet thousands of acres of pines, Wildlight is planned to reflect the unique nature of the Atlantic Coastal Low Country, a region running from Jacksonville to the Carolinas. Our challenge was to create a headquarters that would set an authentic tone for Rayonier while adhering to the strict architectural requirements of Wildlight.

The architecture had to enhance the company’s new philosophy of “One Rayonier”, where people, from lumberjacks to executives, would all be consolidated and treated as equals under one roof, building relationships that foster innovation through collaboration. Just as critical, this headquarters had to meet a key company principle, value, by not exceeding the cost of multiple existing office leases, which resulted in a budget of less than $200 per sf. Research uncovered rich parallels between low country authentic regional structures and Rayonier’s history and philosophy. Based on the idea of the “Big Shed”, the resulting architecture distills Rayonier’s story into a physical, site sensitive narrative that also reflects the Low Country’s water shed, drawing primarily on early utilitarian Rayonier timber sawmills and regional agricultural buildings that express the virtues of simplicity. One Rayonier’s major theme, community, is manifested in the arrangement of free standing constituent communal forms within the building under the big shed, all naturally lit by clerestories. A linear circulation path emulates the movement of wood through a saw mill along a central spine. Three meeting towers are clad with three primary Rayonier woods (pine, cedar, and cypress) displaying a key resource. Conventional break areas are combined into one expressive larger café, affectionately dubbed “Uncle Ray’s” by staff, and located in the most prominent loft position overlooking the lake.

While collaborative sitting steps have become somewhat trite as a design feature in pure corporate settings, at Rayonier the lobby acts as a community theater used by the public extensively, on display under the shed, physically opening to a civic plaza/muse to bring the outside in. An iconic wood sunscreen protects the space, while echoing natural wood patterns. Bridging corporation to town, the space states Rayonier’s desire to be a community pillar…and a civic partner.

“One Rayonier” is a large shed in the woods where the palms meet the pines, and a transformative architecture that has infused a corporate culture with a Low Country style.