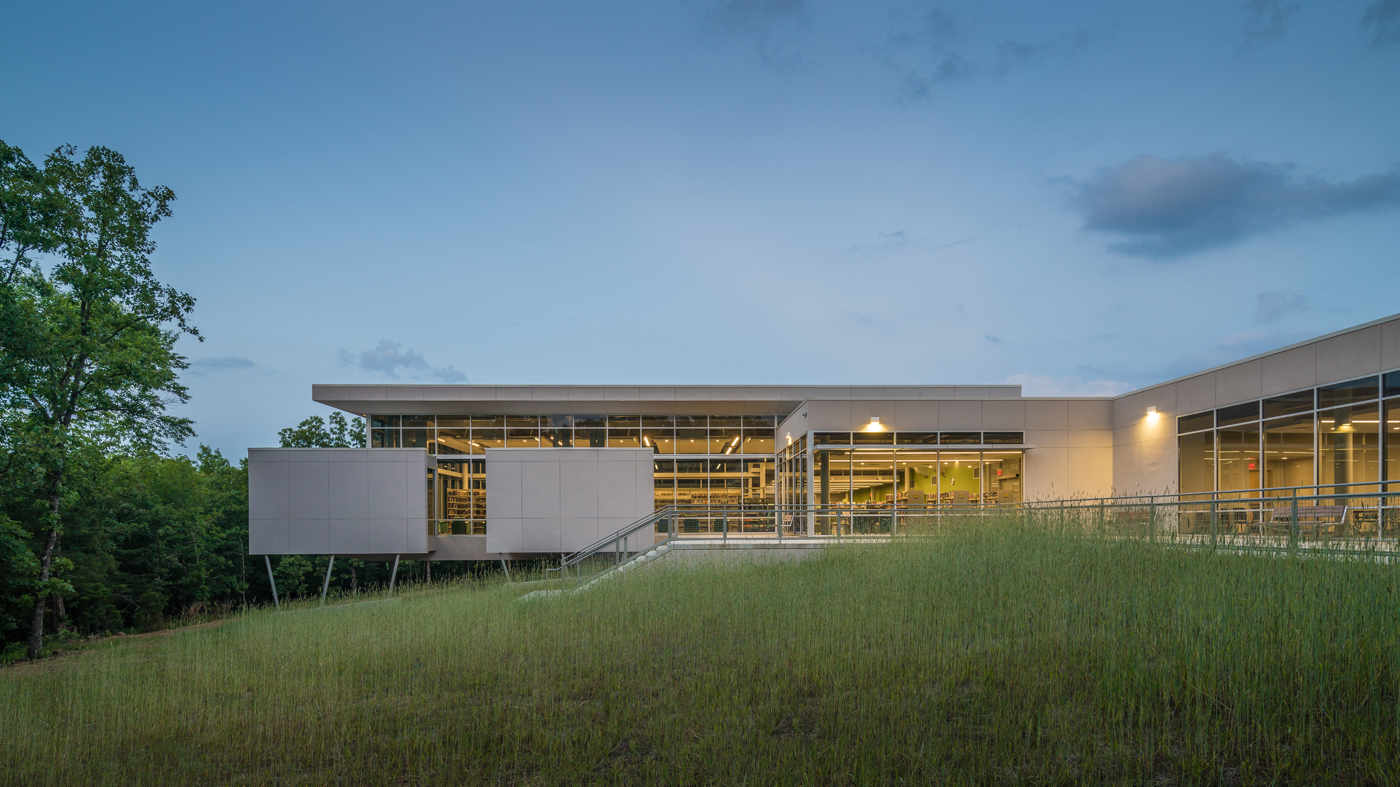 As a city municipality Sherwood formed a selection committee for the new library site. There was approximately 10 sites that a committee made up of local residents, city council members, library staff and the architectural design team evaluated. These were ranked based upon an agreed to matrix that was applied to every site and over the course of several weeks and committee meetings, a short list of three sites was presented to the city council. From this short list one site was selected and purchased by the city and we began work nestling the 14,500 S.F. building program on it. The site is a heavily wooded 15 acre parcel with a steep slope falling off from the street. The design team along with the city decided to take the approach of setting the building within the existing trees and steep terrain rather than a more typical clear the trees and level the ground approach. As a visitor approaches the building, it immediately becomes obvious that this is a unique place in that it is as if one is driving through a forest that a building has been carefully placed in. We took advantage of the natural topography to string the public functions along a ridge facilitating easy entry from parking into the building without stairs or ramps. We than capitalized on the steep terrain at the rear by projecting the reading room out into the woods elevated on columns at mid tree level which gives the impression that one is in a treehouse. Further enhancing this floating feeling we suspended the individual and group breakout rooms off of the reading room, these rooms also perform a shading function from the west sun into the reading room. The ceilings of the reading room, teen’s area and children’s element have exposed structure from which a grid of ceiling tile hangs creating clouds concealing the mechanical ducts as well as providing acoustical control . Lighting is suspended between the ceiling clouds.

The public meeting room is accessed via the main lobby and can operate autonomous from the library allowing it to be used during off hours. The meeting room occupants can also access the public toilets as well as an exterior terrace after hours.

This facility is seen as providing civic function for the community so in addition to a public meeting room a small exterior amphitheater that takes advantage of the natural site slope is planned for a future phase adjacent to the building. Hiking paths through the wooded site have been incorporated into the site design.