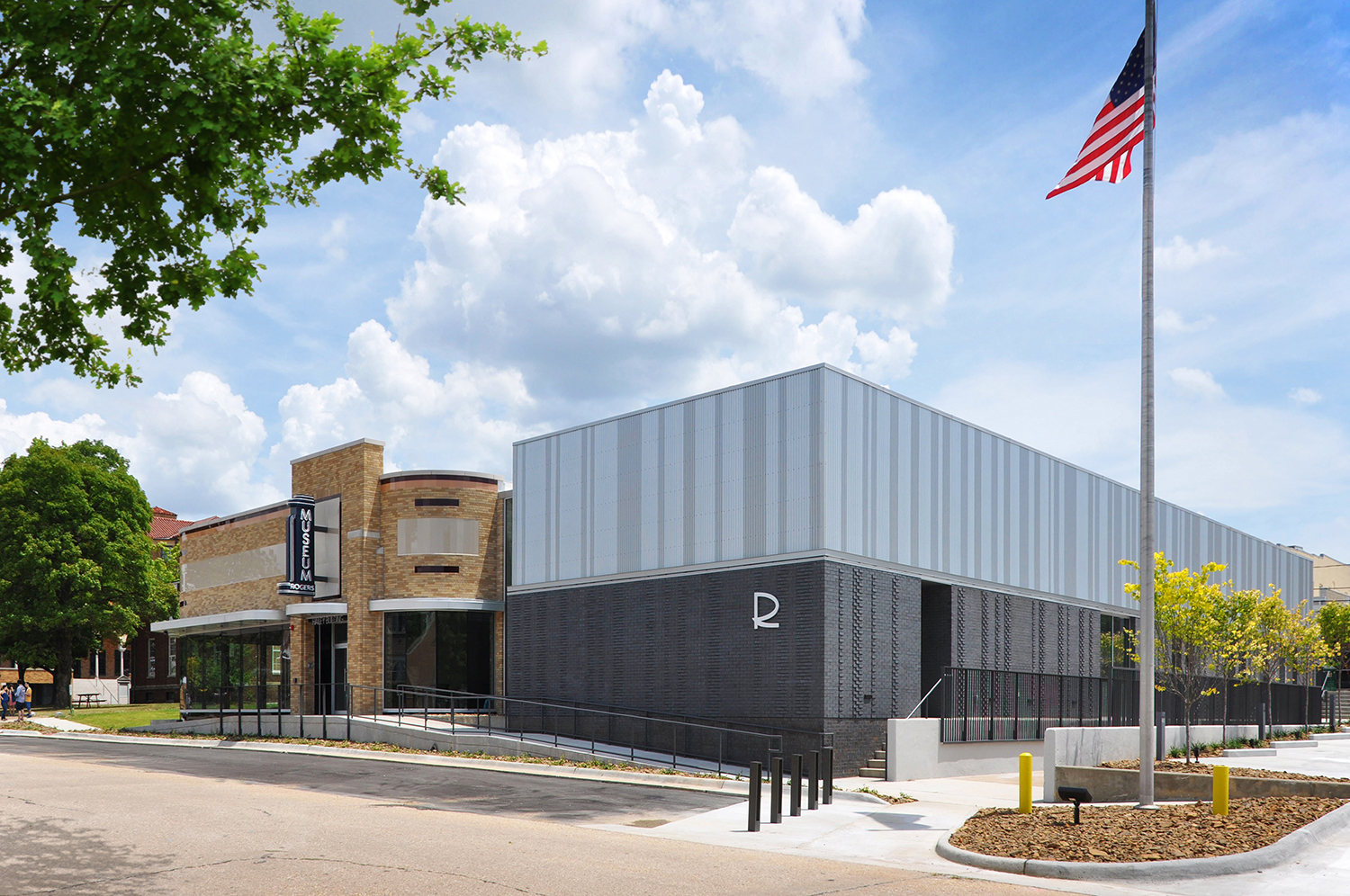 The Hailey Building is an adaptive reuse and historic restoration for the Rogers Historical Museum. It is the most recent addition to the Museum campus located in historic downtown Rogers. The project consists of the original Hailey Ford car dealership, built in 1947, and an addition built in 2006. The muted treatment of the 2006 addition was designed to highlight the Art Deco style of the original 1947 building. 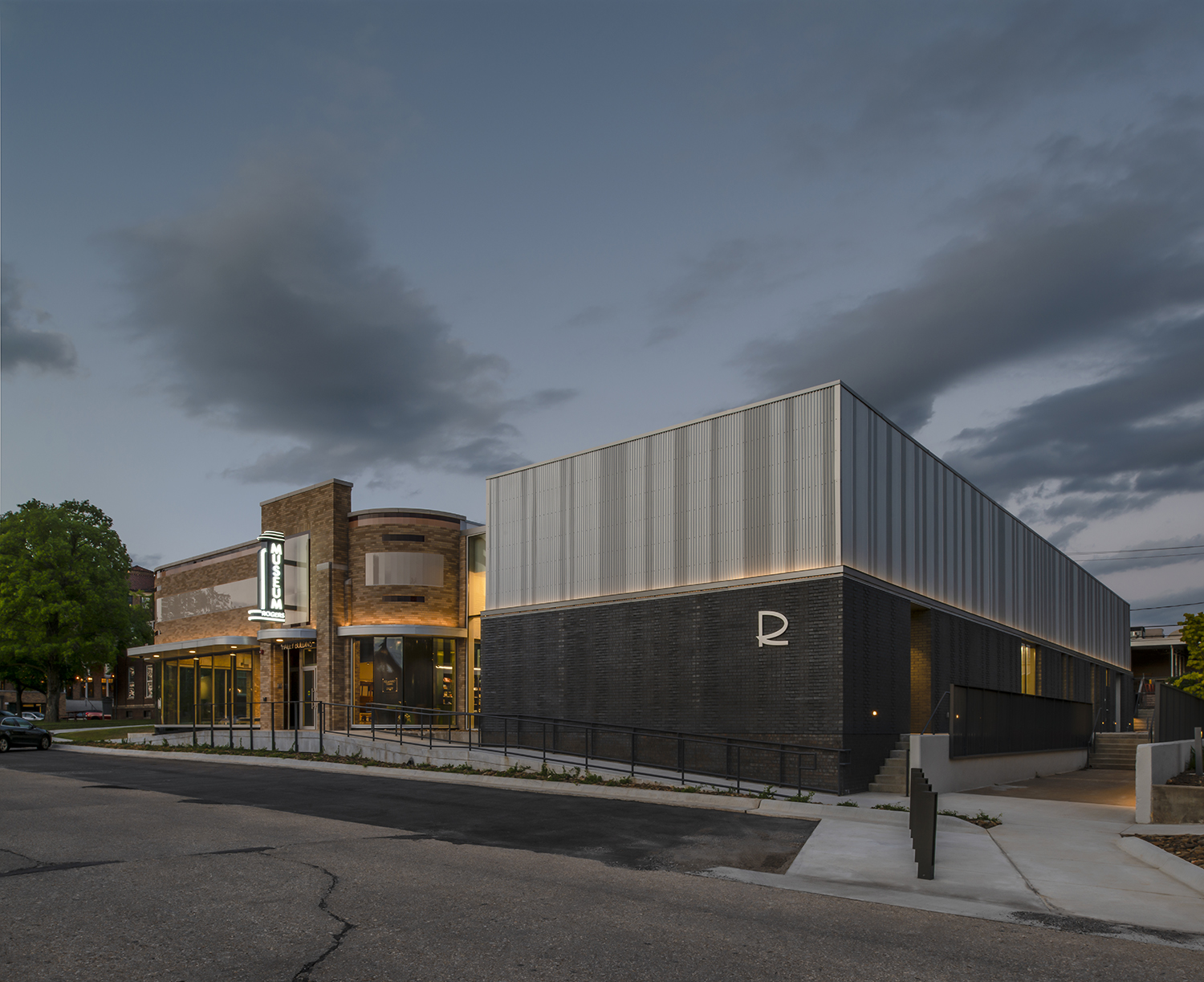 The Hailey Building is an adaptive reuse and historic restoration for the Rogers Historical Museum. It is the most recent addition to the Museum’s campus which anchors the southeast side of the historic downtown district of Rogers, Arkansas. Reinforcing the Museum’s mission to ‘enrich lives through education, experience and exploration’ of the region’s unique heritage, the project celebrates the idea of the ‘city as exhibit’ by capitalizing on relationships between the stylistically diverse collection of downtown buildings, outdoor public spaces and connective pedestrian pathways that engage the community at large. The Hailey Building houses the Museum’s primary exhibit spaces, administrative offices, and exhibit workshop.

The project consists of the original Hailey Ford car dealership, built in 1947, and an addition, added in 2006 when the building housed a newspaper office and printing press. The exterior strategy for the two stylistically separate but joined buildings was to restore the 1947 structure to its original exterior presence and to re-skin the 2006 structure in an updated but muted way that defers character to the Art Deco styling of the old Ford dealership. The subtle articulation of the grey brick and tone-on-tone metal panels on the newer structure interact and shift with light and shadow as conditions around the building change throughout the day, and a light shelf continues that play of light by activating the building at night, providing a simple, elegant backdrop for the historic building.

The project site, as it is in the downtown area, is tight and contained. To take advantage of surplus exterior spaces the existing loading dock was transformed into an outdoor classroom that continues on to the alley space behind the Museum. This ties into an alley activation plan the City defined in a 2015 masterplan. The adjacent parking lot was reimagined with tree plantings and unique pavement graphics, to double as an exterior plaza.

Inside the building the exhibit spaces take full advantage of the existing open web steel trusses that allow for complete flexibility for the exhibits to move and change as needed. This space is bisected with a diagonal circulation path that shapes the galleries and leads to the exterior alley behind the Museum. The thinner bar shaped addition houses visitor support spaces, a smaller specialized gallery, the administration area and exhibit workshop/delivery area. 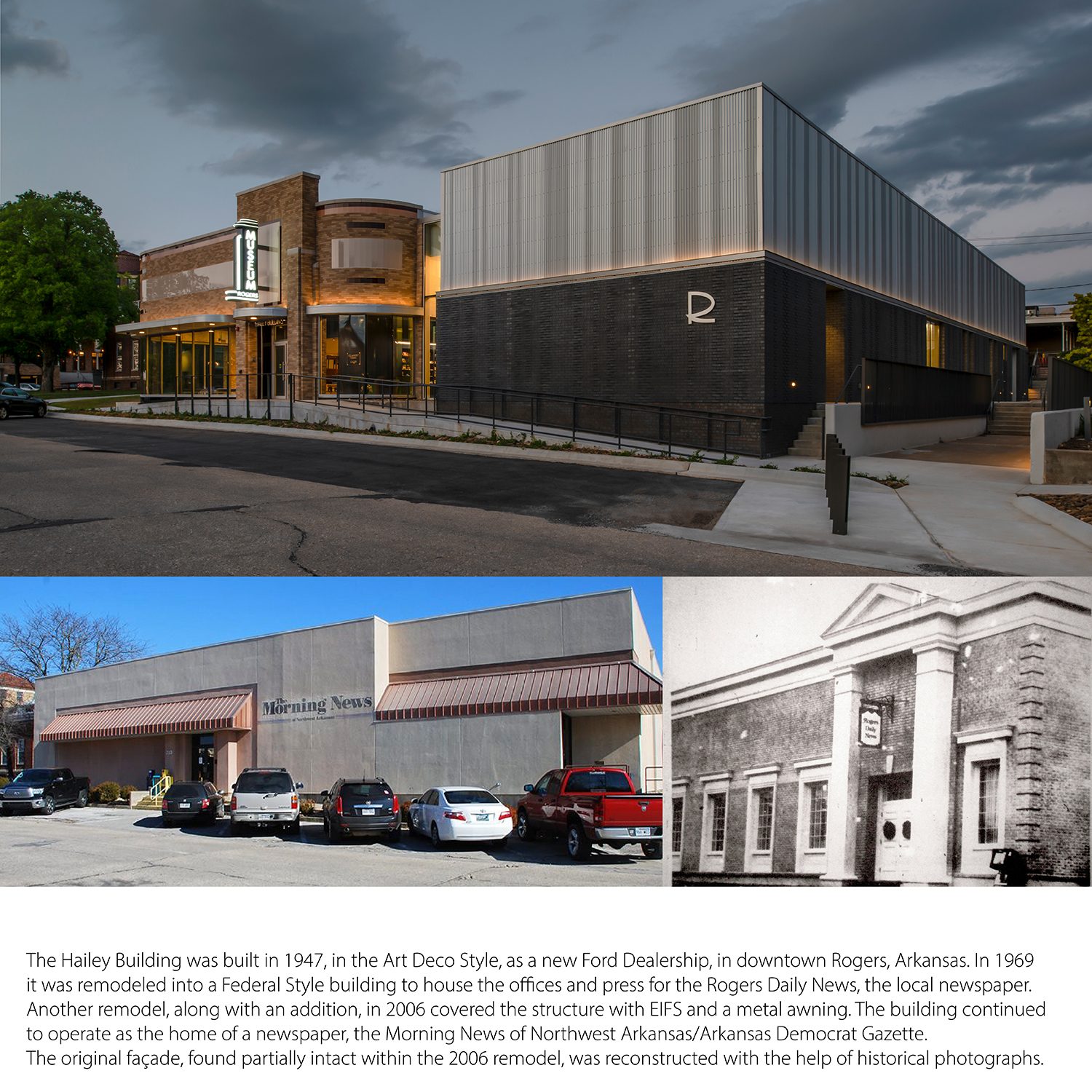 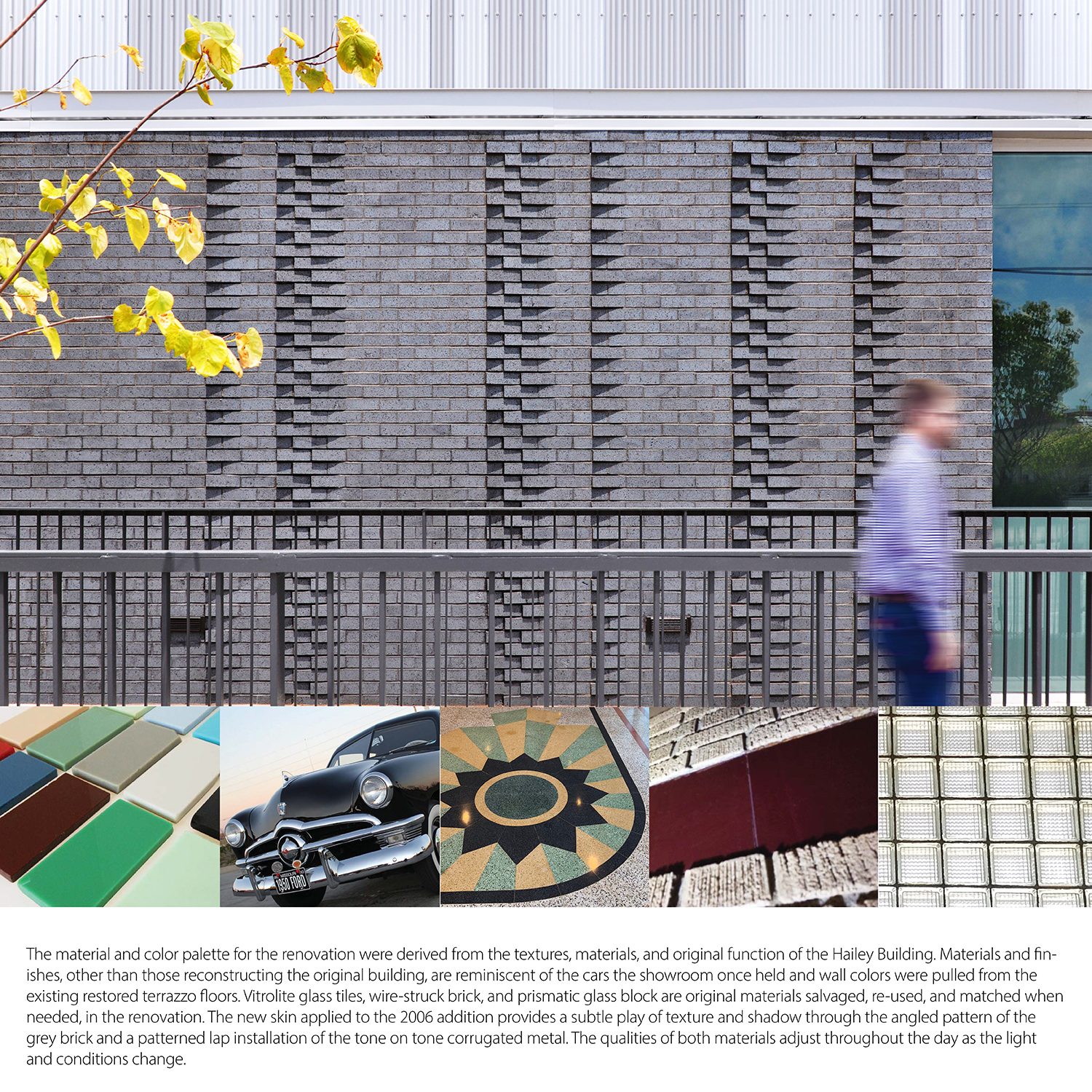 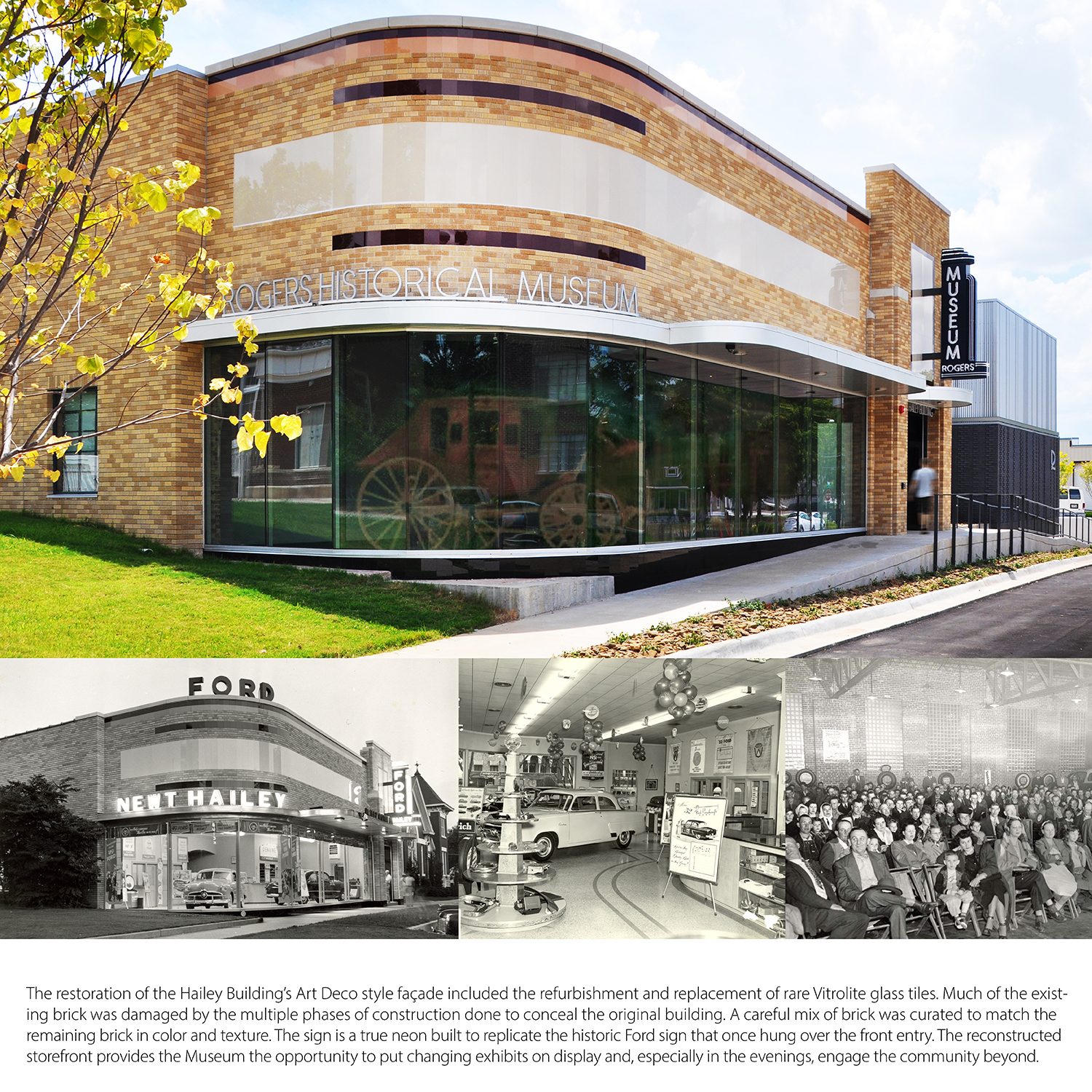 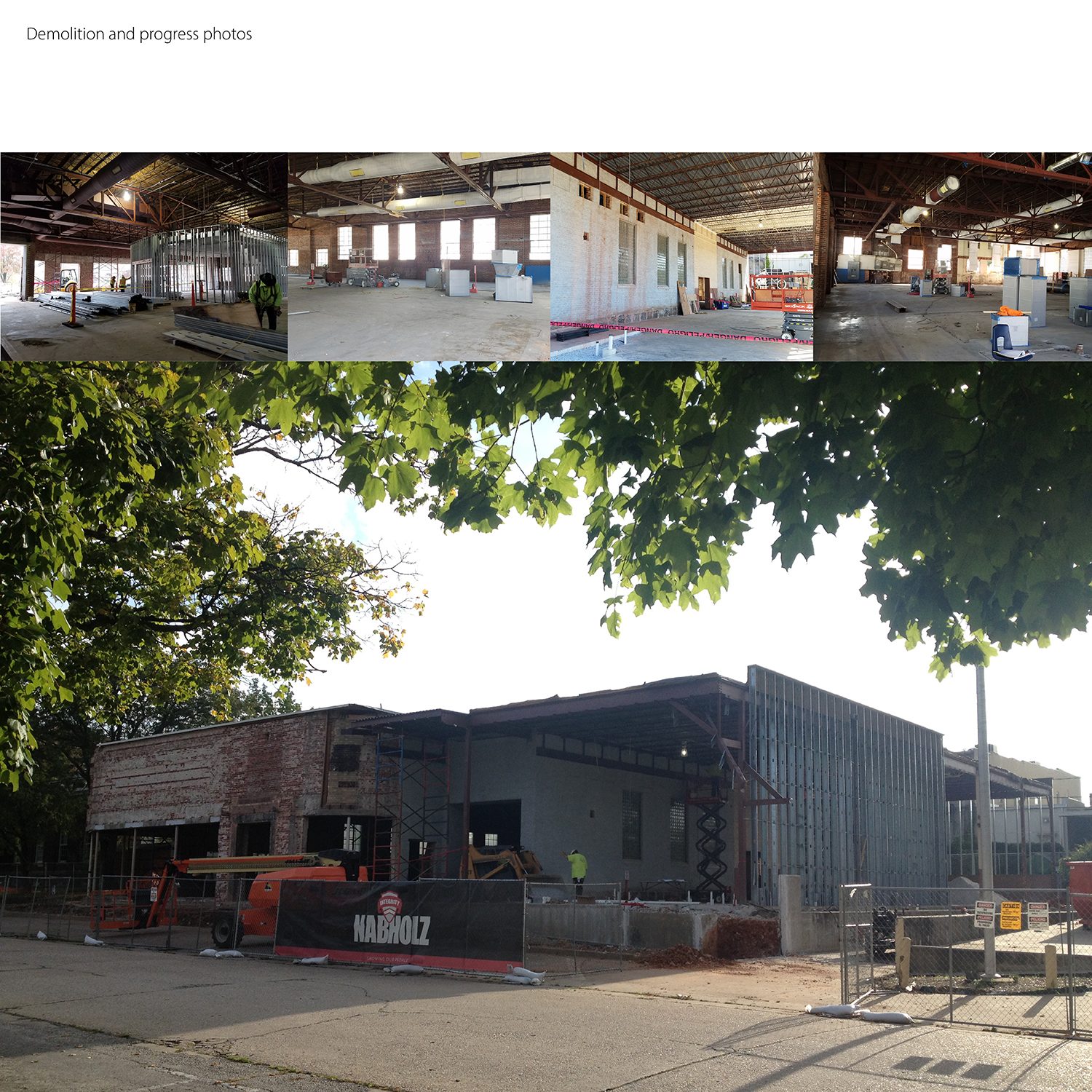 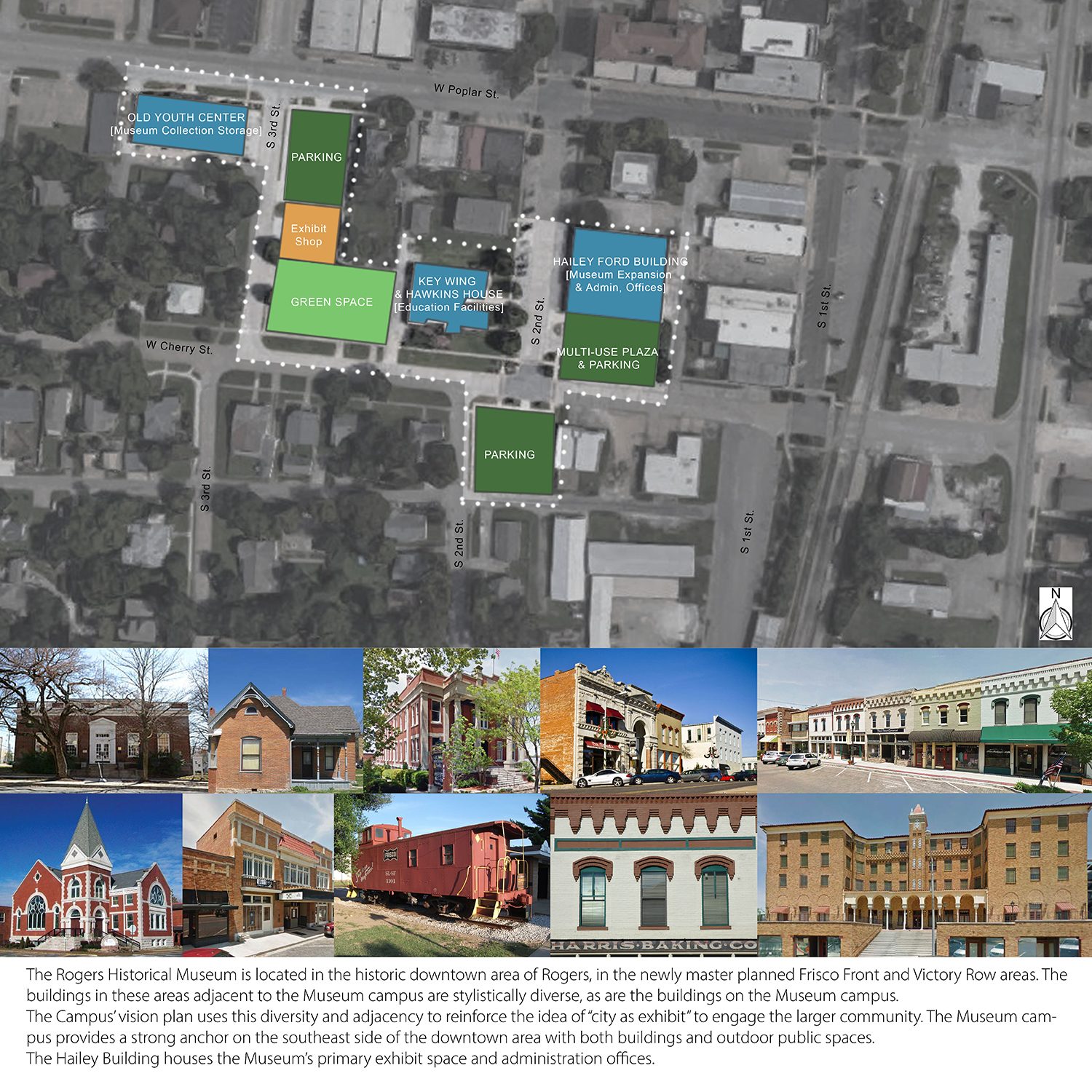 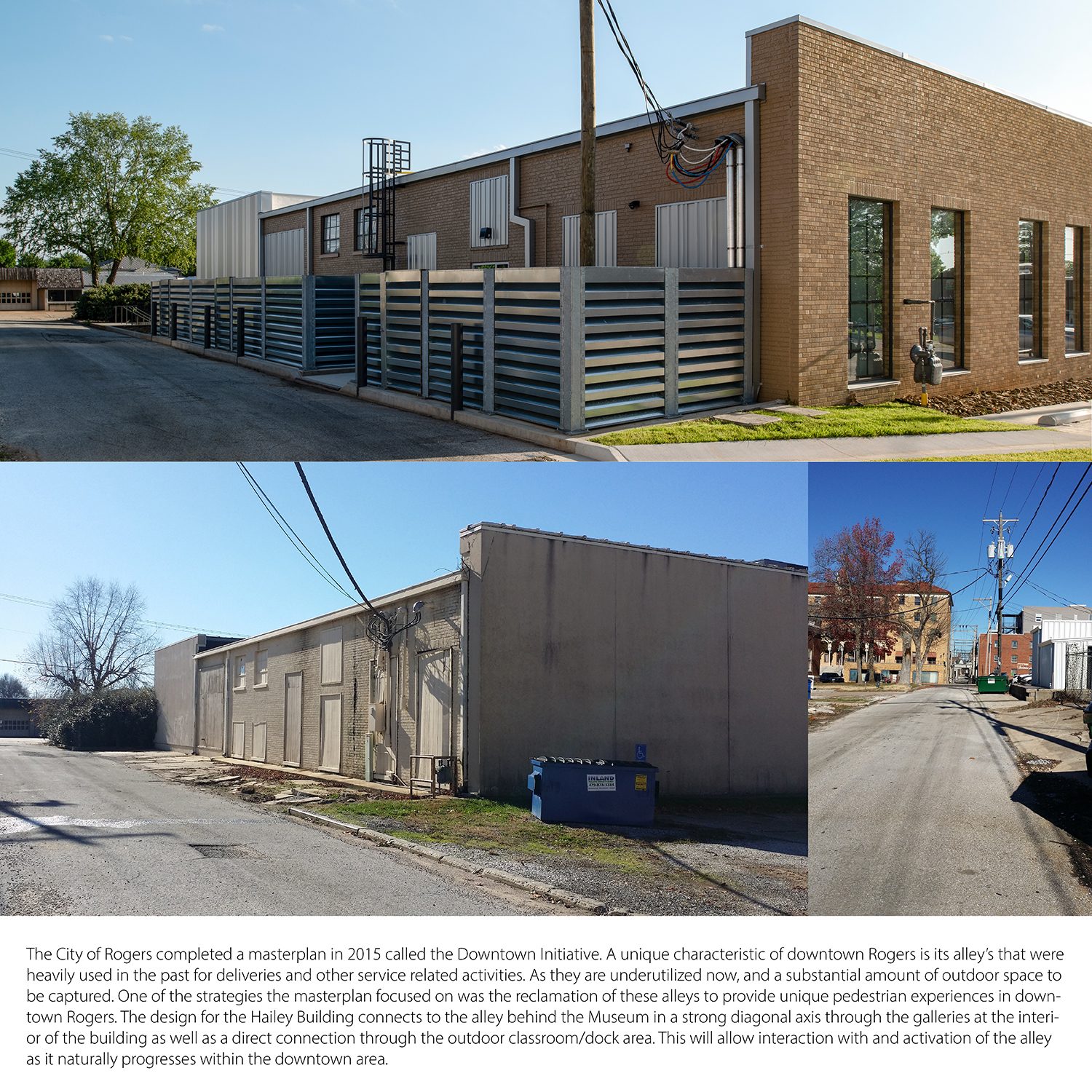 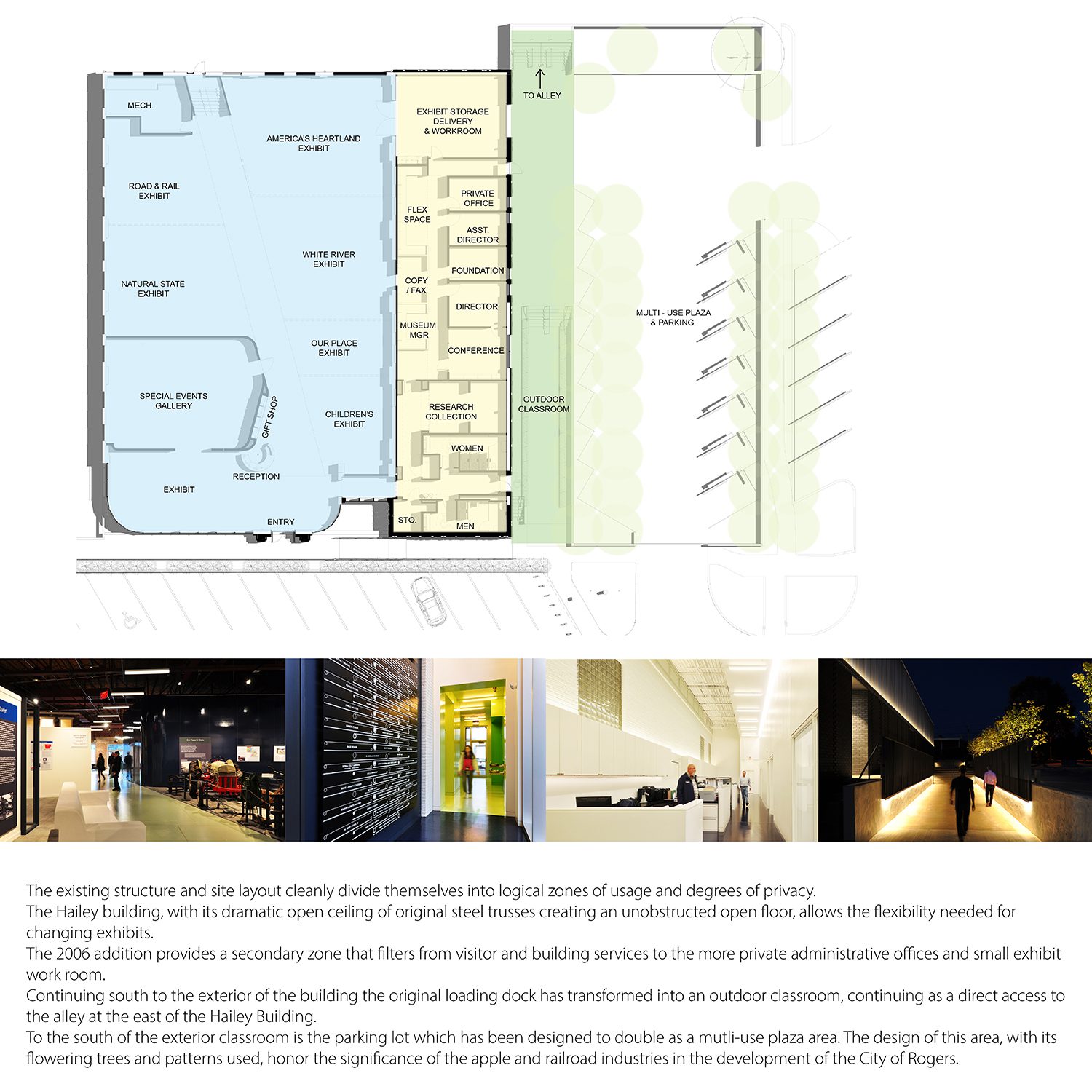 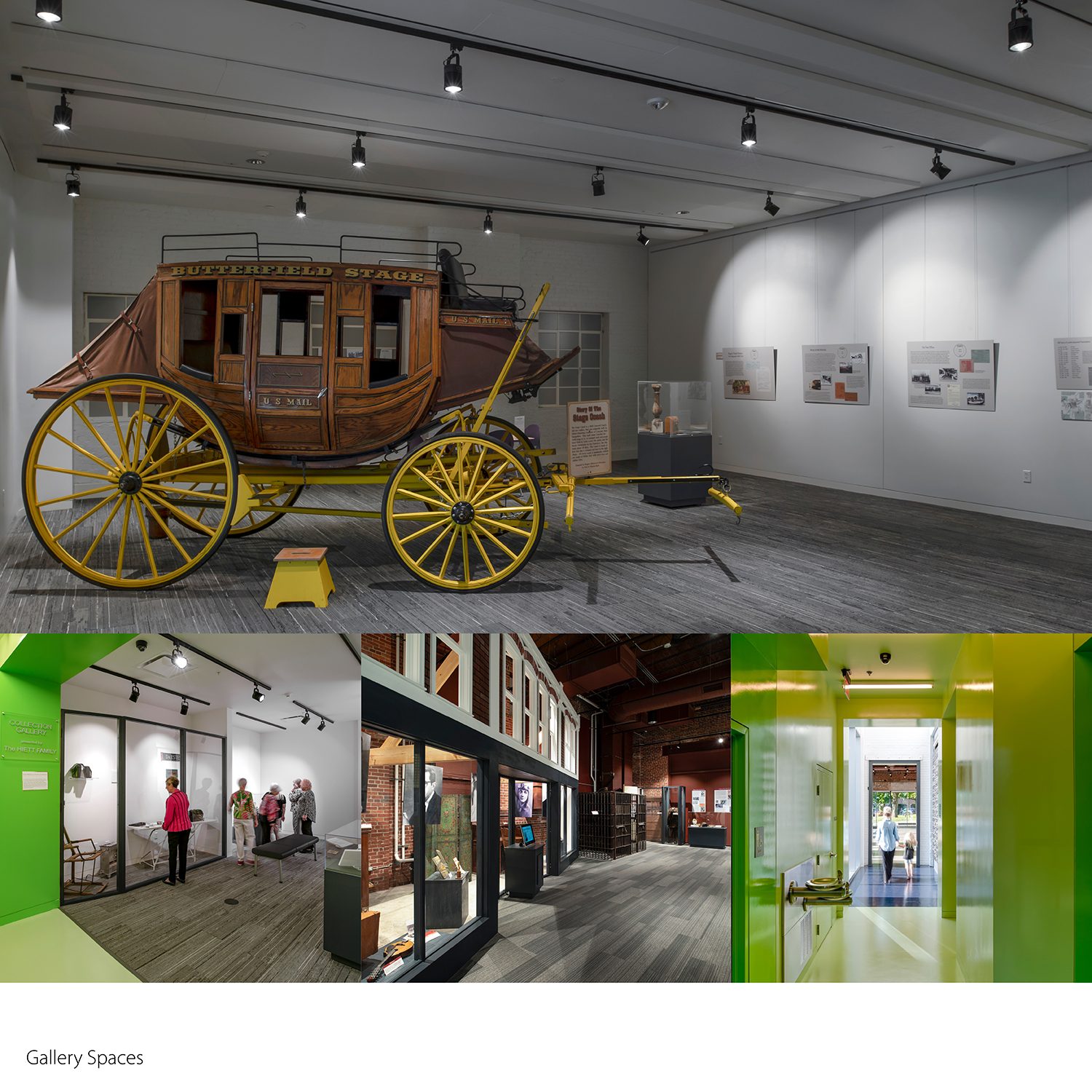 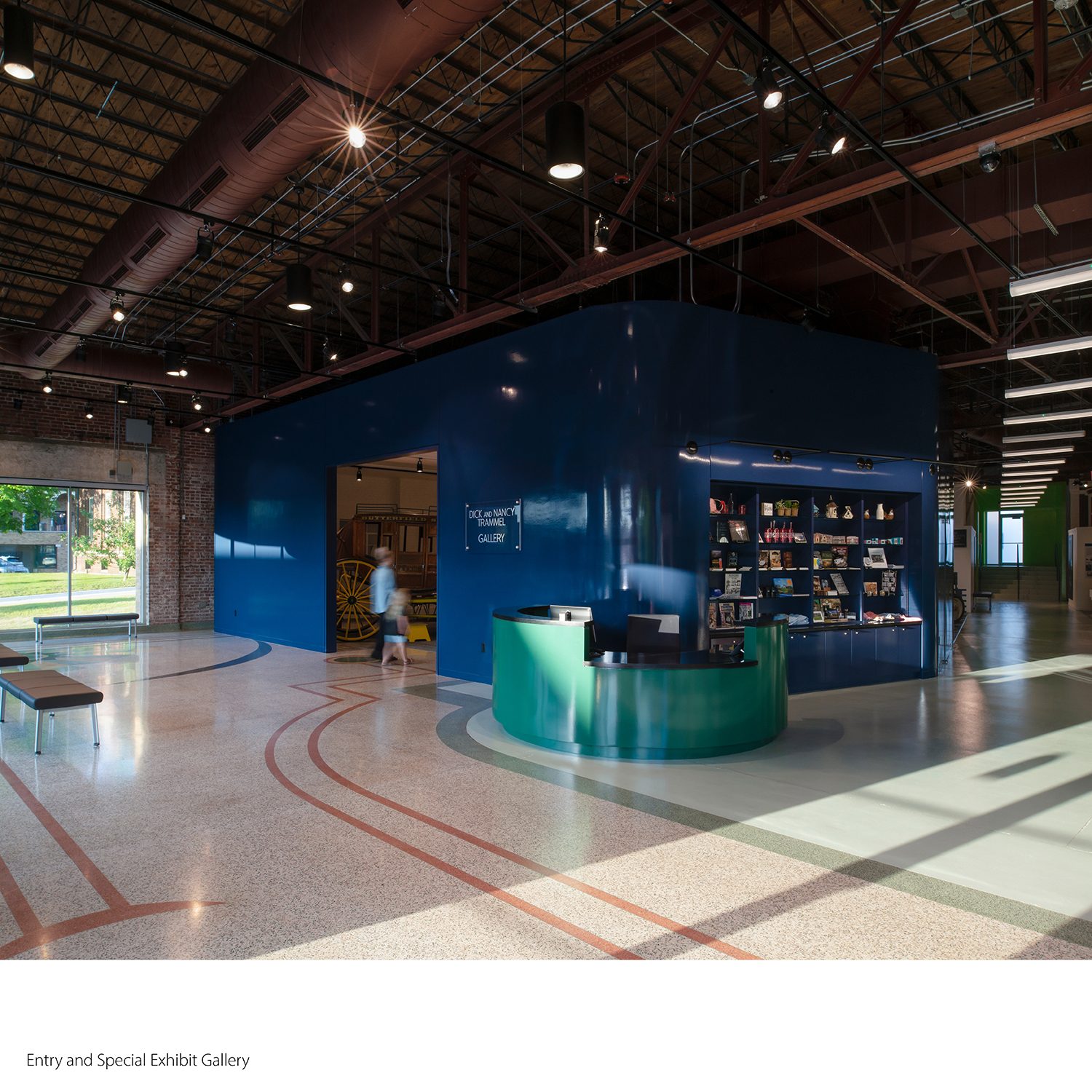 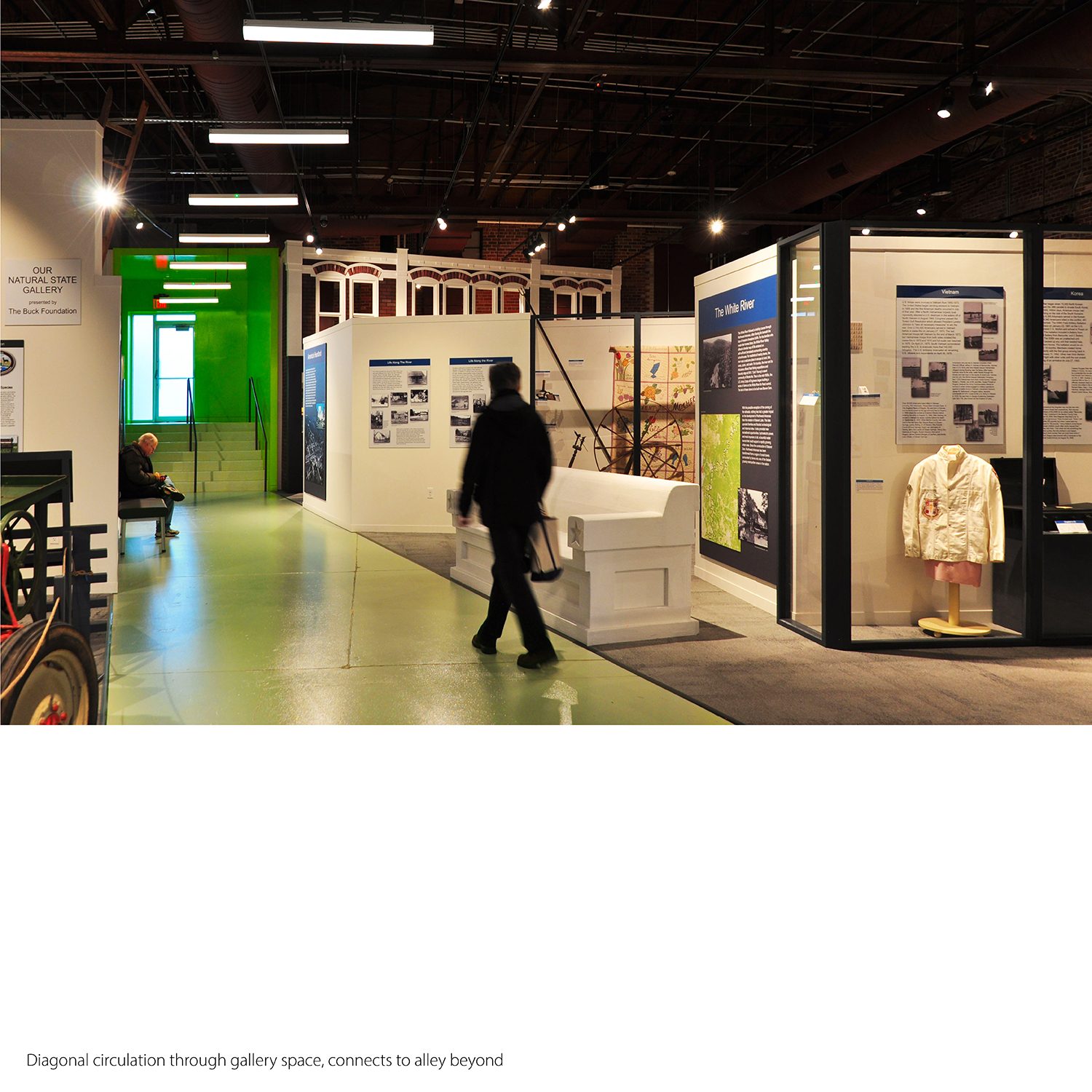 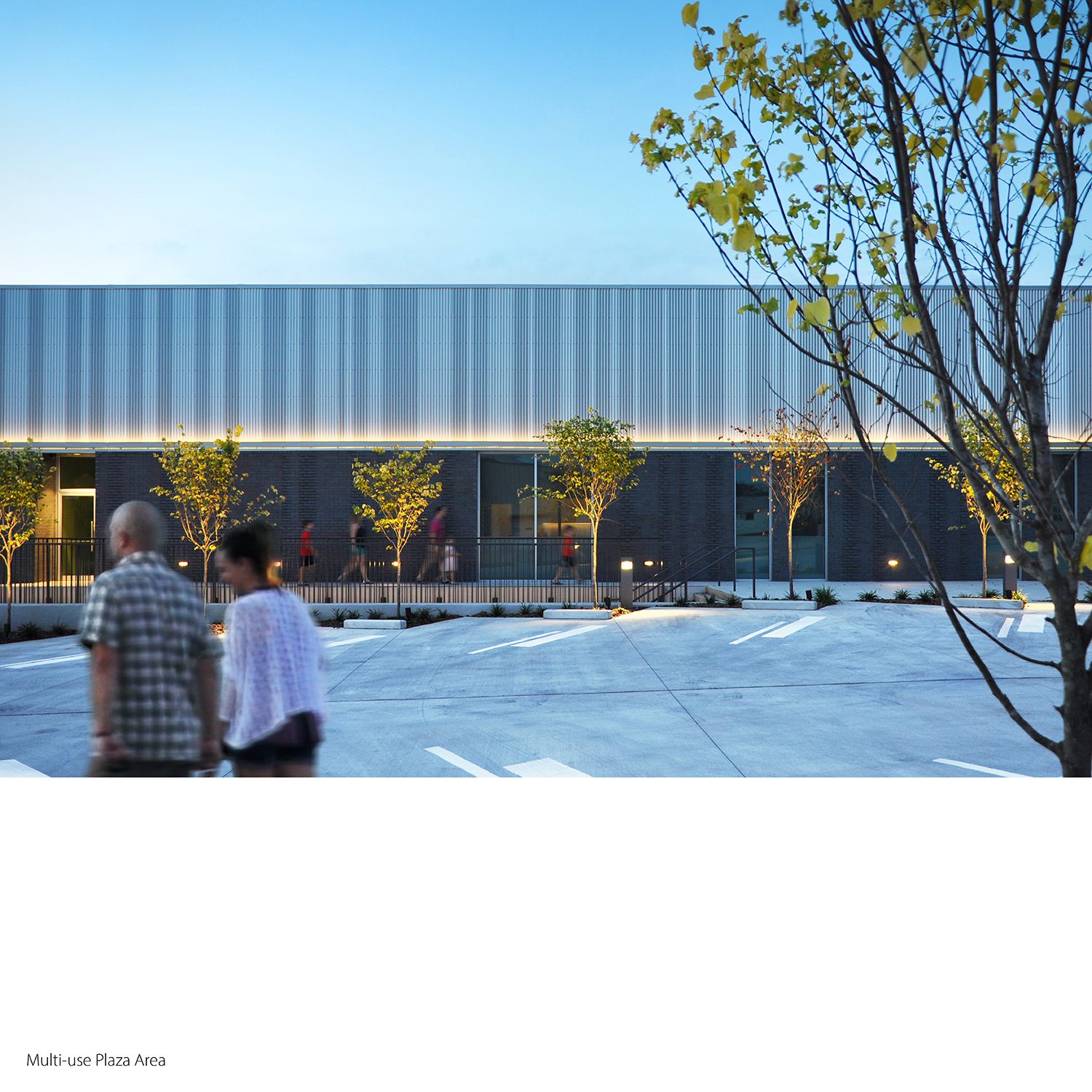 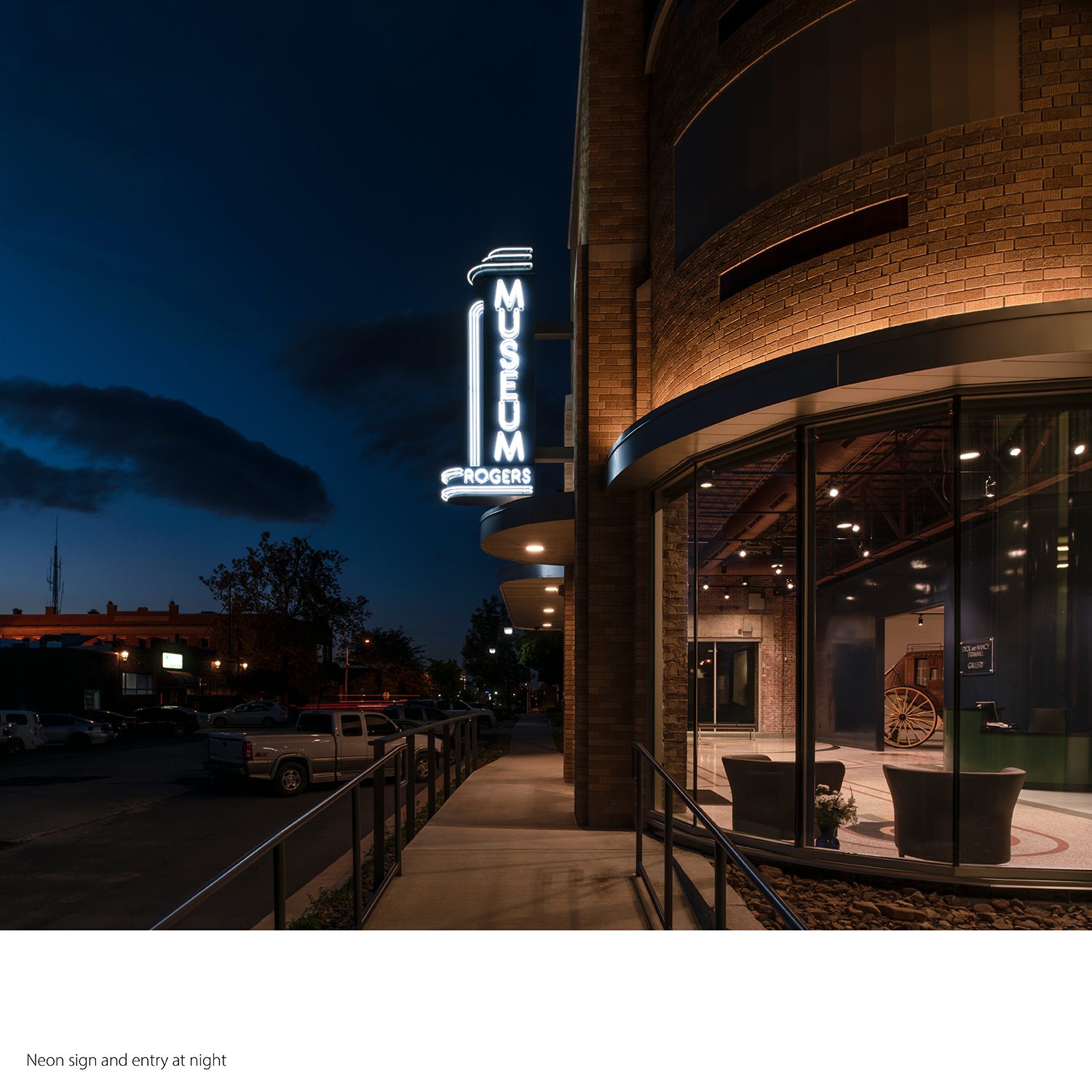