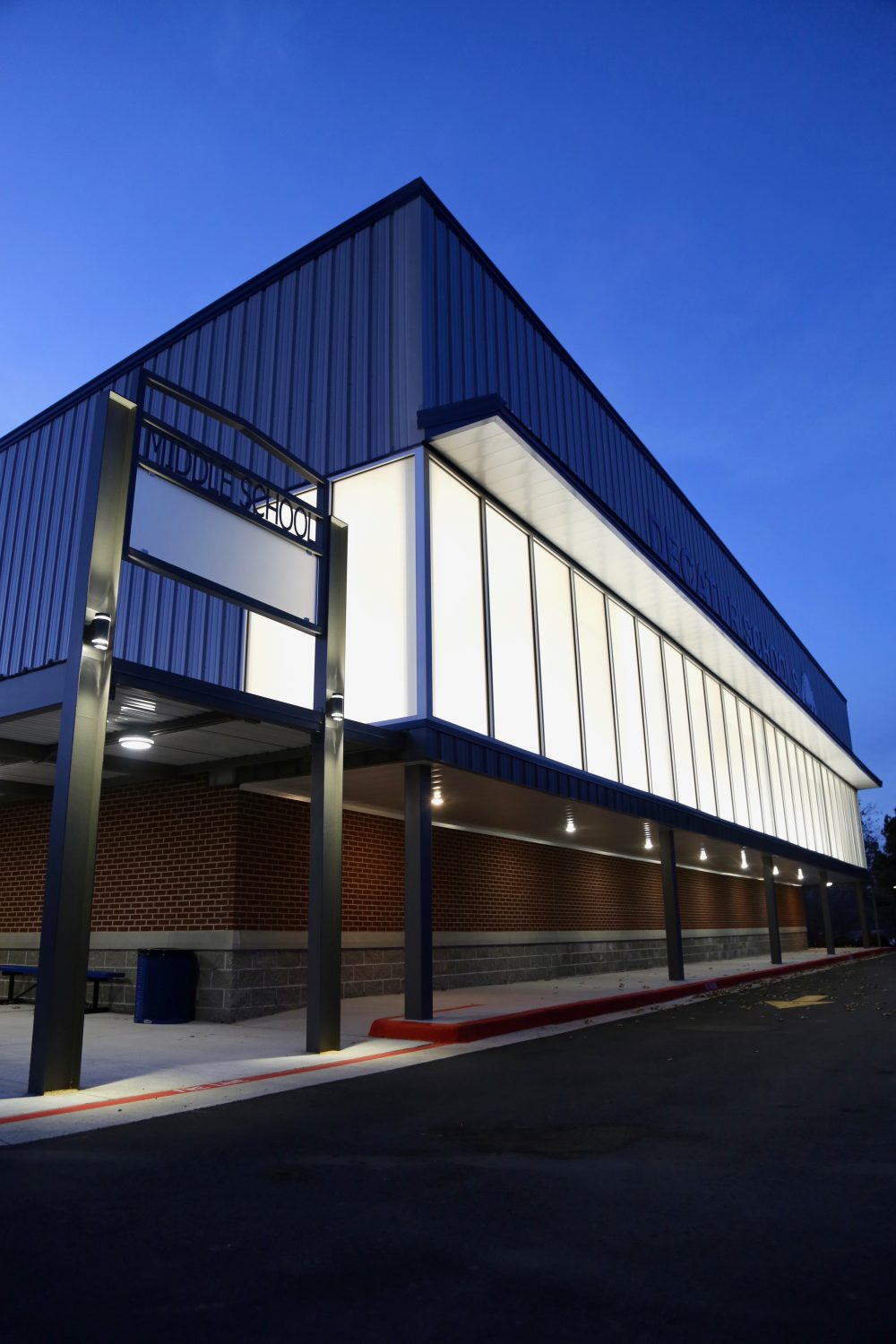 The initial project in Decatur, Arkansas, was to take the 1959 Elementary School, a building to which many in the community held sentimental attachment, and make it shine as the new home of the Decatur Middle School. Located prominently on Arkansas State Highway 102 (the main road through town), the new Gymnasium with its textured block, traditional brick veneer and new lighted signage, provides a WOW factor as you enter the city limits. The unique design and renovations ensure that this project is something the community of Decatur can be proud of, both now and well into the future. 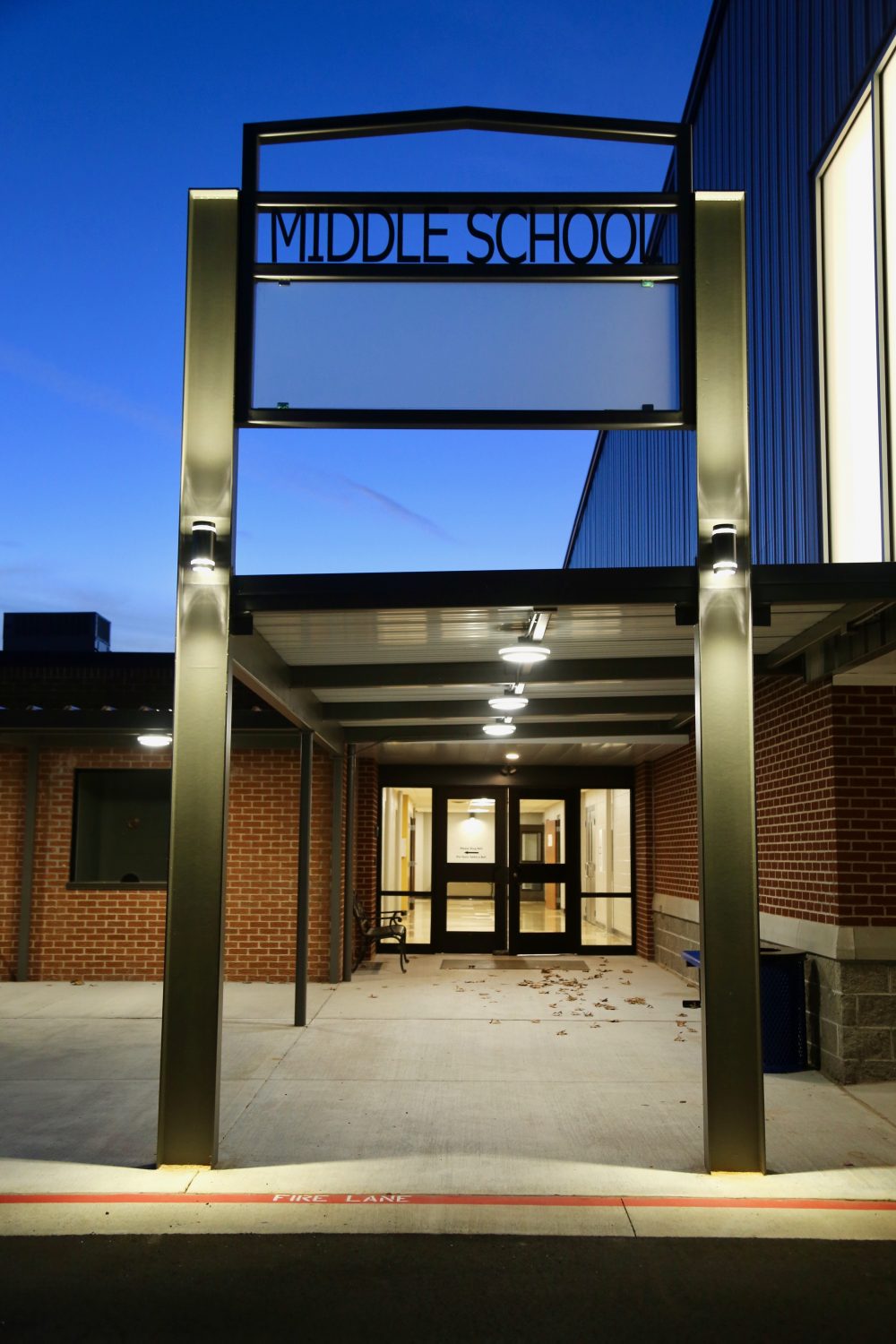 The Middle School and High School share the same campus, therefore, the new Gymnasium fills the need for the Middle School, and offers a practice space for High School Basketball and Volleyball. In addition, the school now has the additional Gymnasium needed for hosting tournaments.

The challenge for the project was to establish a more prominent building that would be seen from the well traveled State Highway 102, with the new Gymnasium. To do so, required demolition of the oldest classrooms which were located in the middle of the school. That demolition area was surrounded on three sides with existing areas which were to remain, and was done while the school was in session. We worked closely with the Construction Manager to make the most cost effective choices, while keeping costs down.

Looking at the Decatur Middle School project as a whole:
33% was NEW CONSTRUCTION
17% was REMODELED
50% was providing a FIRE SPRINKLER SYSTEM, SOME ELECTRICAL & ROOFING WORK in a portion of the building.

The electrical service entry was updated, to bring it up to code. New roof areas now have a minimum ¼” per foot slope for positive drainage, and the metal walls and roof panels served as an efficient material to enclose the upper portion of the building. The oldest classrooms in the original building were demolished due to asbestos, making room for the new gymnasium. Existing floor elevations were raised and adjusted to accommodate ADA.

Roof insulation was added to the addition, allowing the use of a more economical wet fire sprinkler system. Old batt insulation on the lay in ceiling was removed to provide access to computer cables. The decision to move the Middle School to this location, allowed for additional classroom space to accommodate growth.
In addition, both dressing rooms in the gym and one storage room (which were in the middle of the building with no exterior windows), received a concrete roof to create a safer area for students to go to during a storm.

It was an exciting time, as a steel skeleton went up quickly for the new gym, and a floating wood floor with cushioned pad and moisture barrier were installed. The school colors of blue and gold were used on bleachers which include 273 seats and 5 ADA spaces. New lighted scoreboards were provided, one on each end of the gymnasium, which is flooded with natural east light from the windows. Also included were basketball goals and a removable net & poles for volleyball competitions. A variety of activities and events will be held in the new gym including but not limited to: PE classes, assemblies and graduation ceremonies.
The school colors of blue and gold were also used in the girl’s toilet room, the reception area and the nurses’ station area. Included in the design, was a private School Board Entry area for school board sessions, which doubles as computer classroom. Also added, was an area for efficient pick up and drop off of students.

The 1959 building was in need of a "face lift". This project delivered a much needed update that the School District and City of Decatur are very proud of. 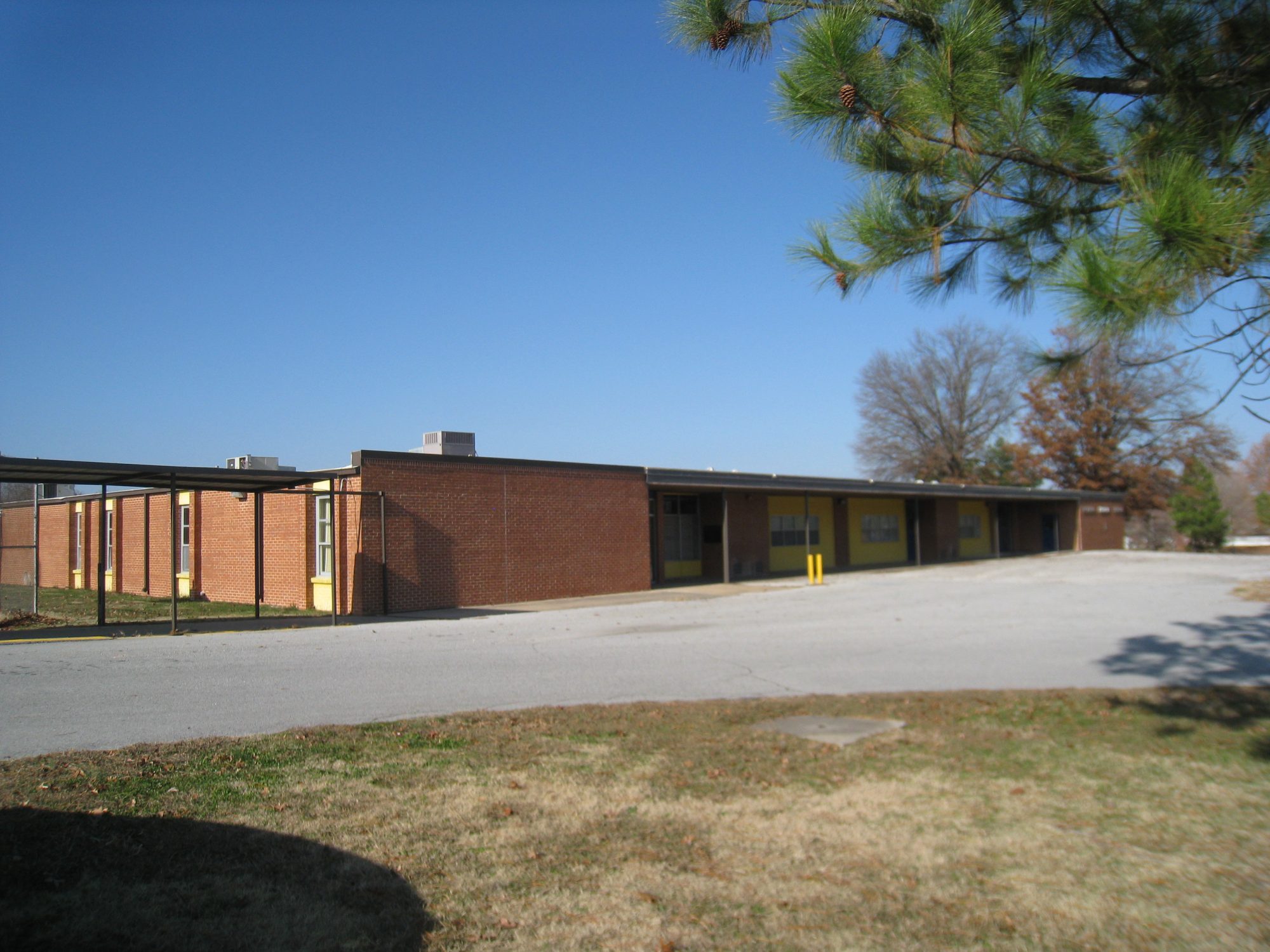 Front of existing building, showing area of canopy with recessed classrooms behind, that were demolished for the new gym in the center 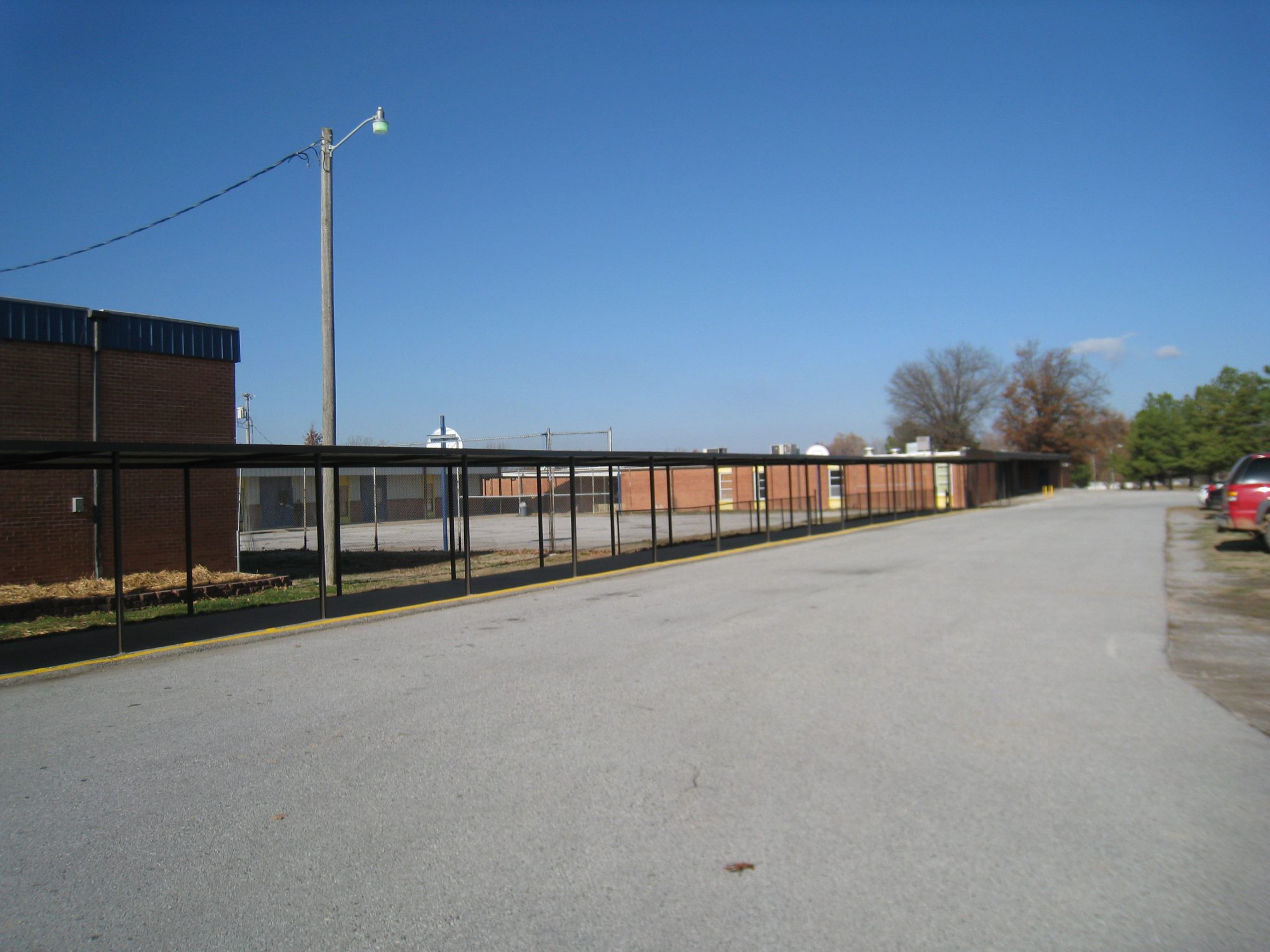 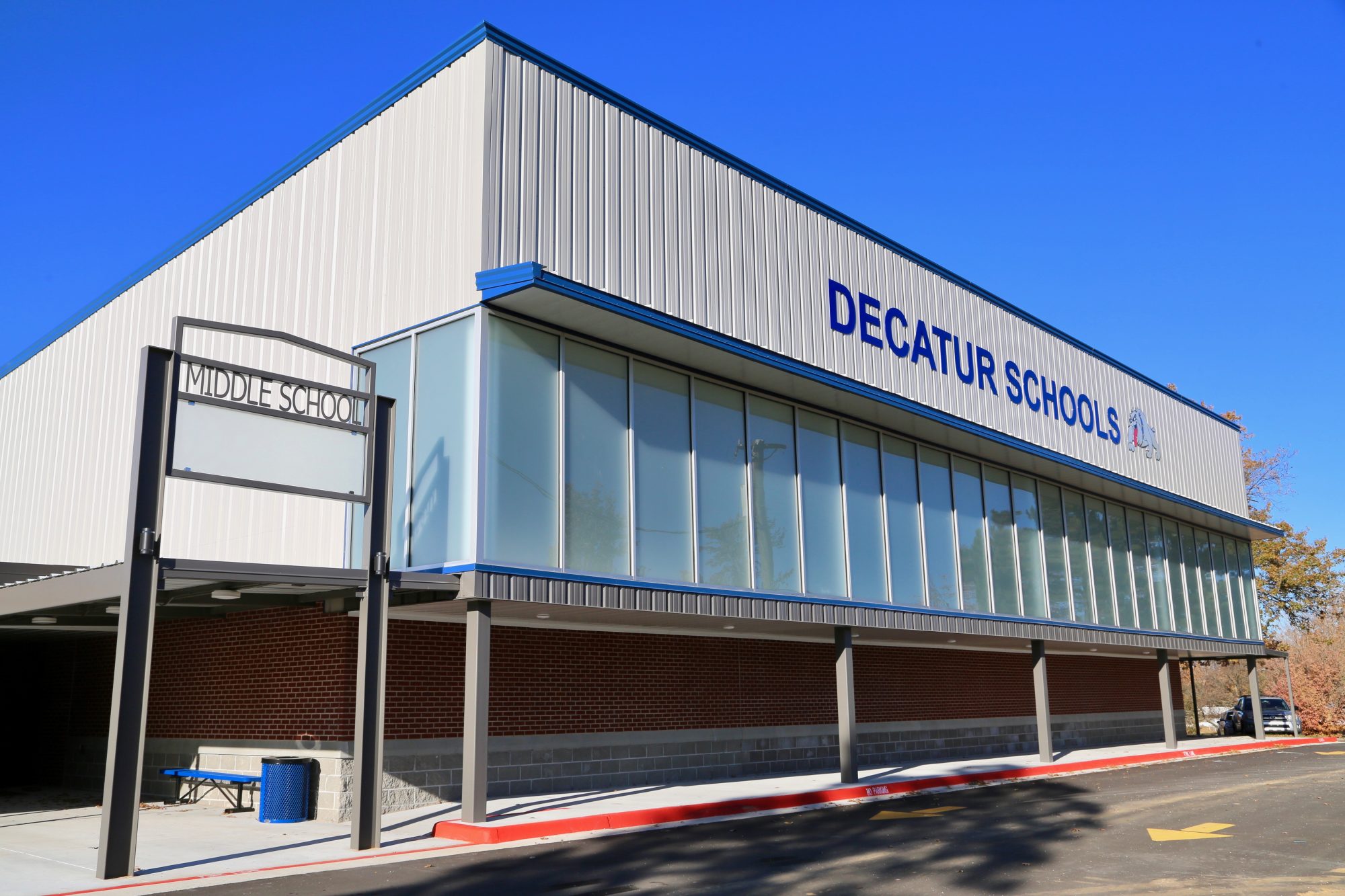 The front of the Middle School faces Highway 102, is the most visible of the schools in Decatur, and serves as the “billboard” for the School District 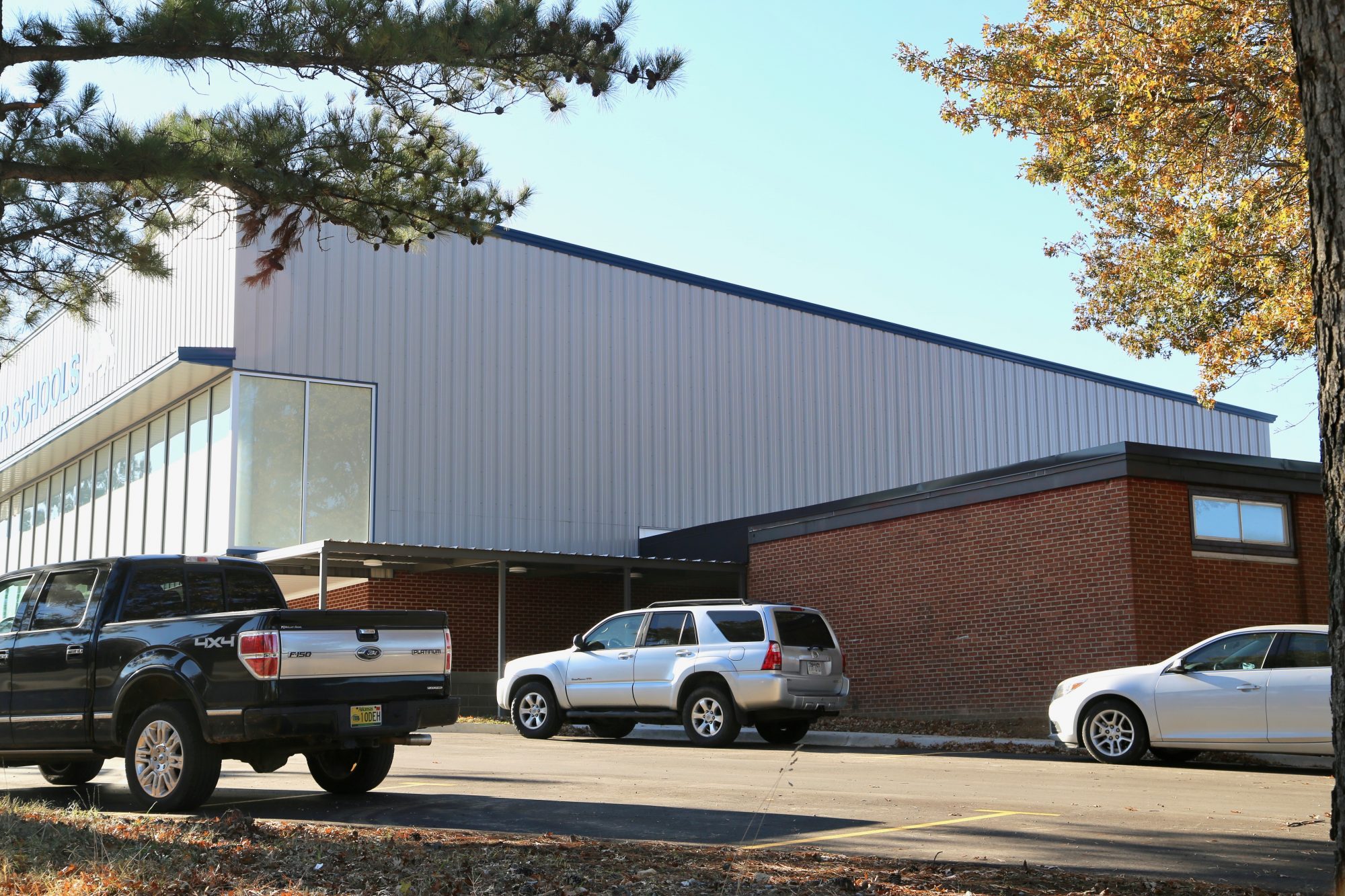 School Board Room with its separate entry 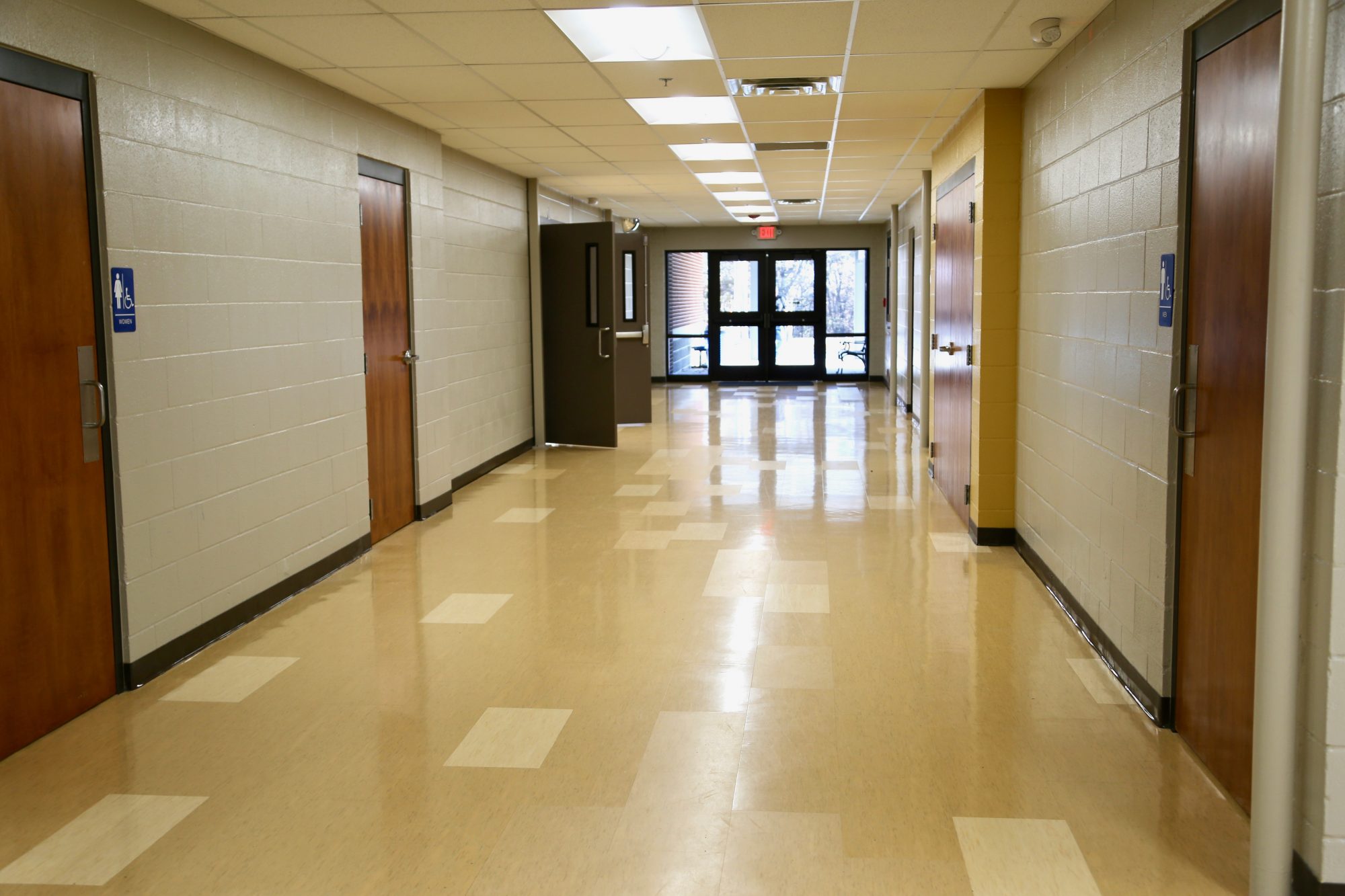 Corridor to Administrative Offices, Gymnasium, Public Toilets and Concession, can be closed to the School Corridor during evening functions 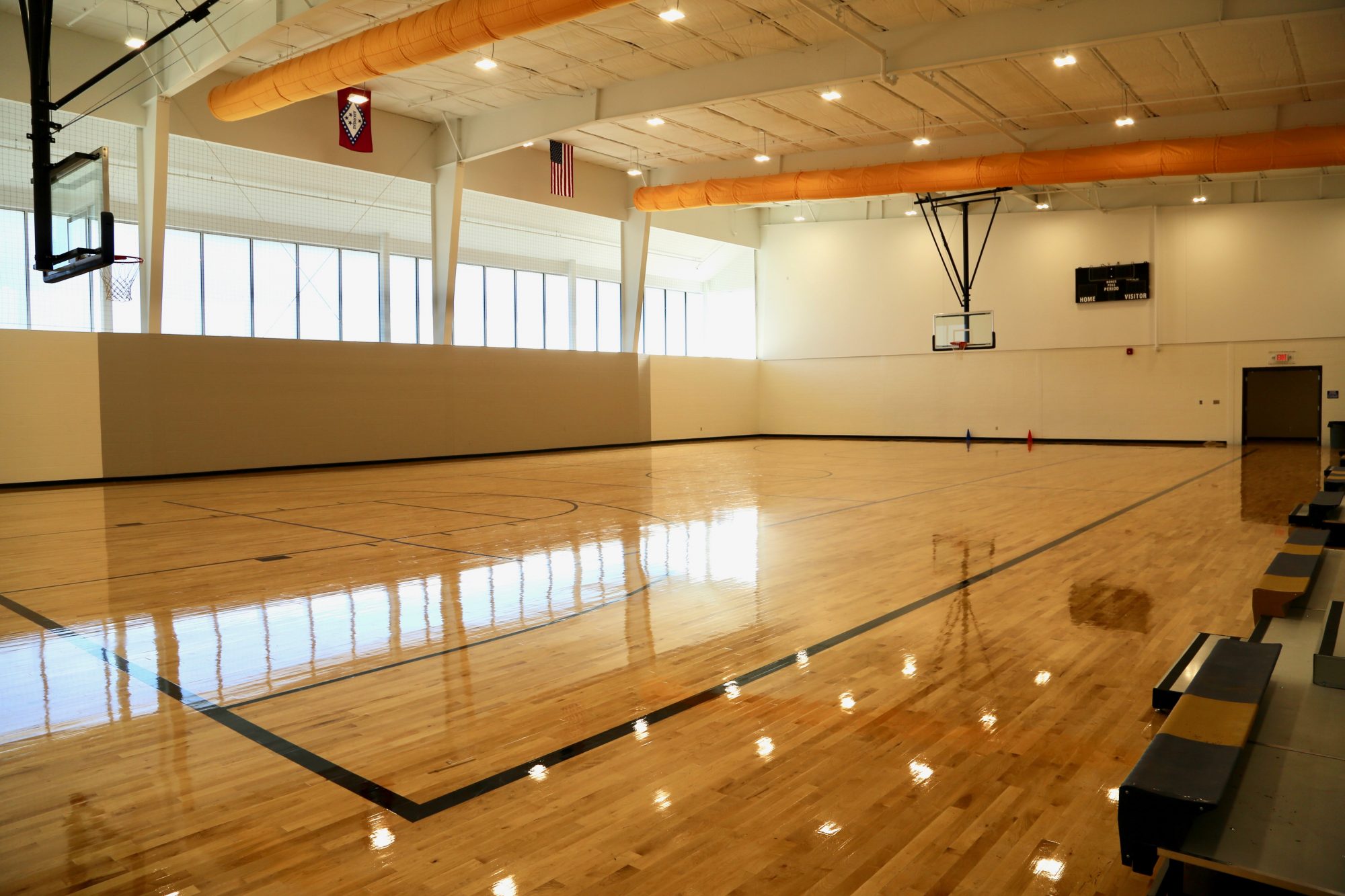 Natural east light spills in to the Gymnasium, illuminating the competition Basketball and Volleyball Court 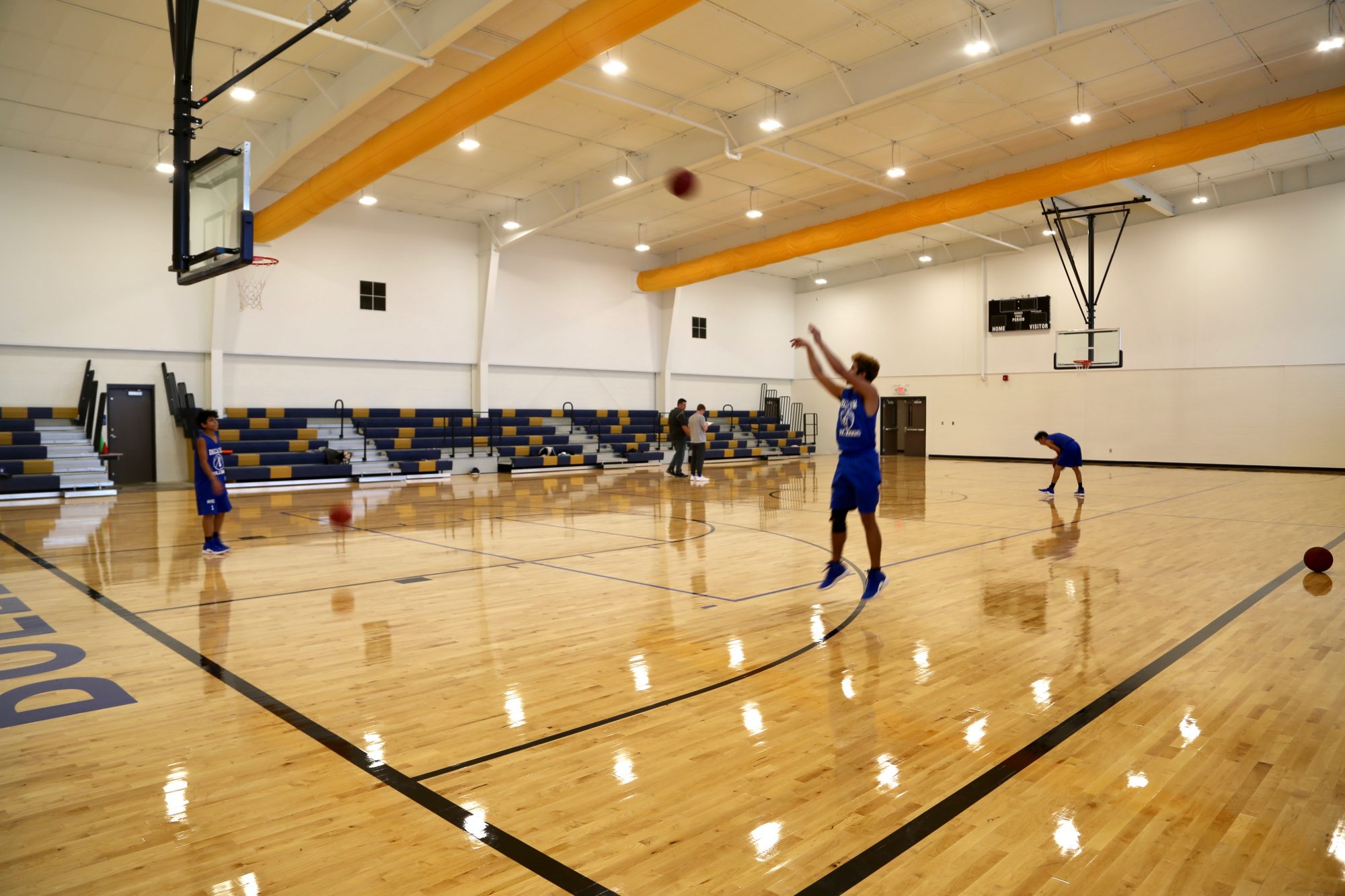 Gymnasium photo looking toward bleachers, with dressing room doors on both ends 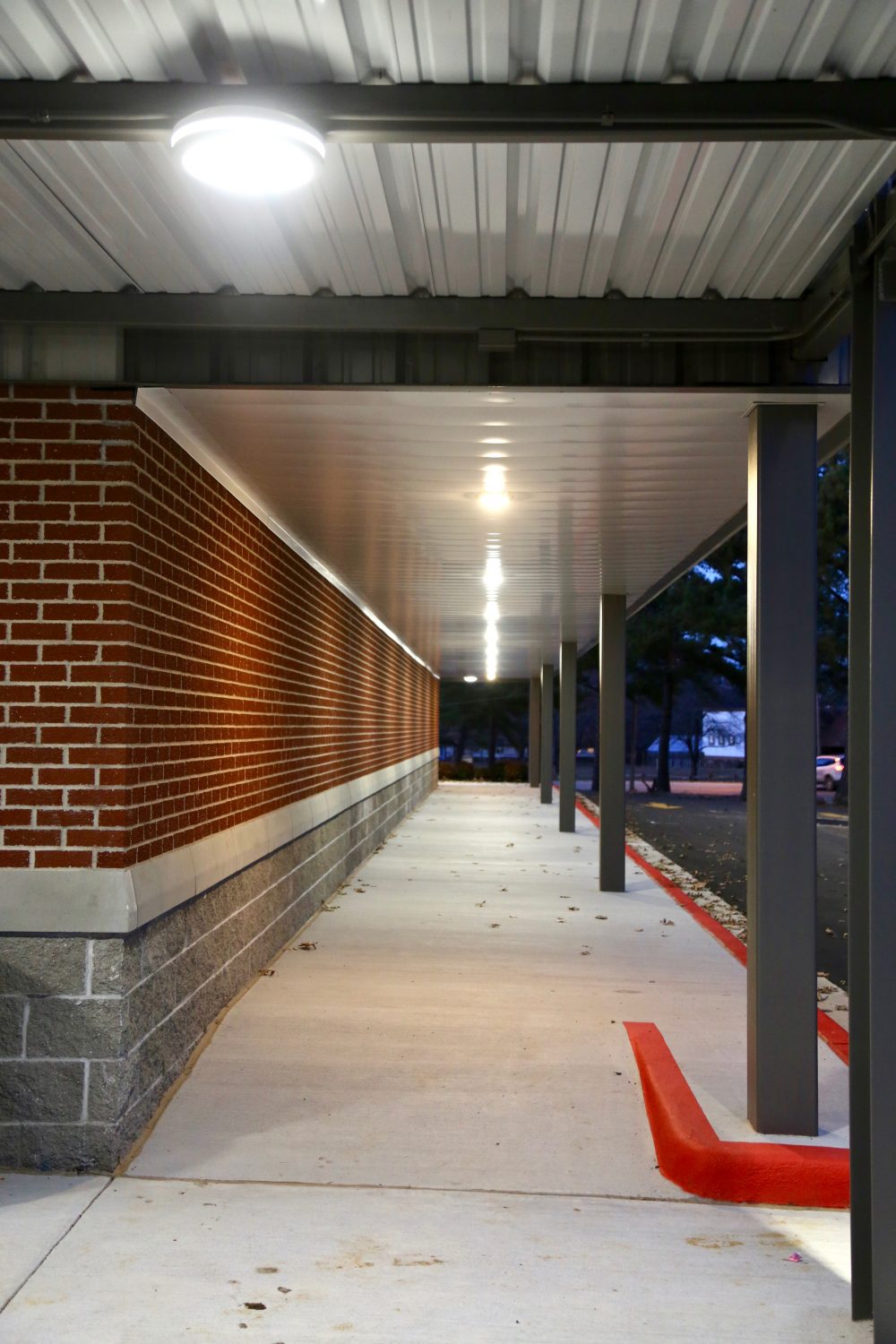 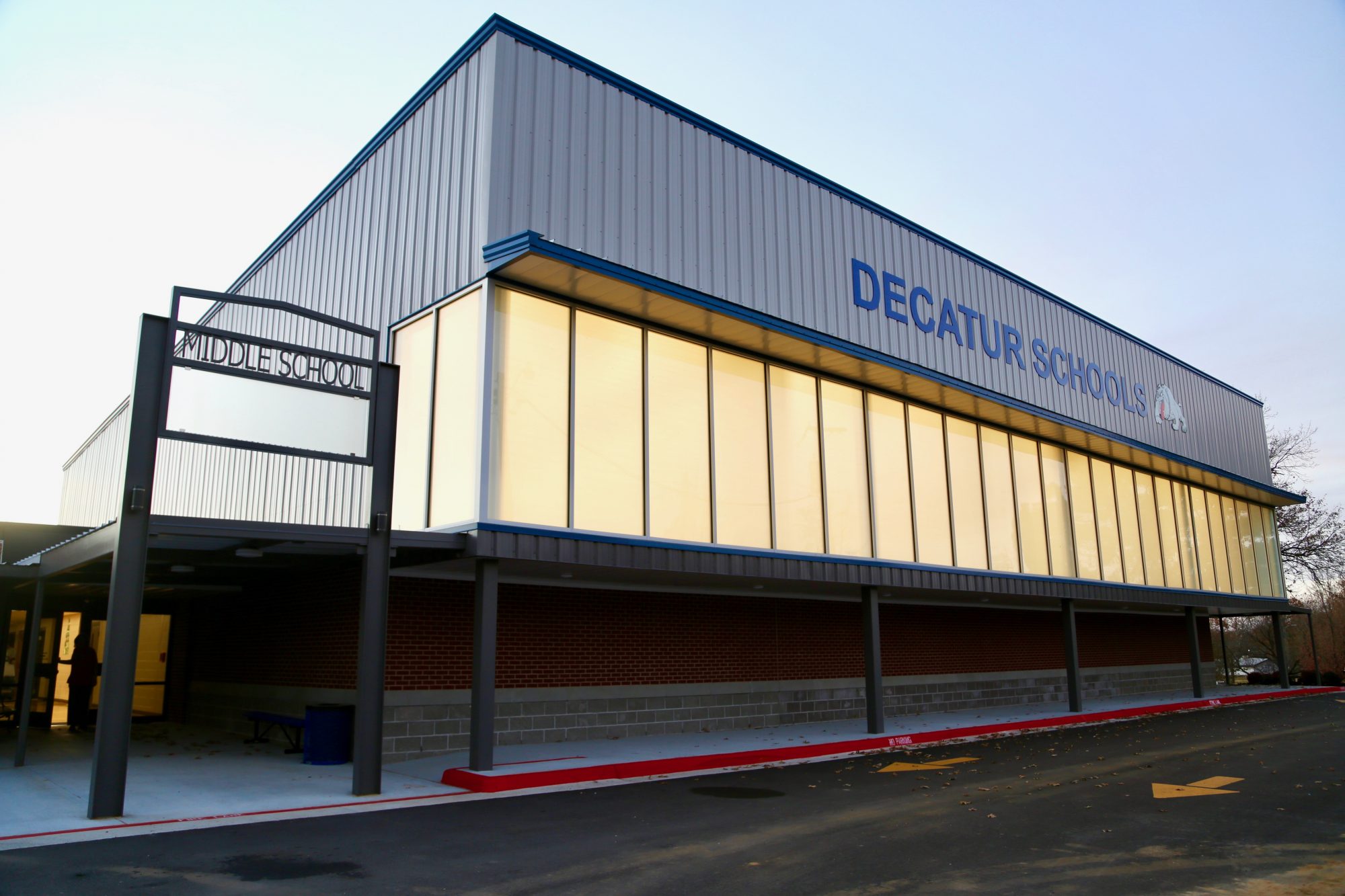 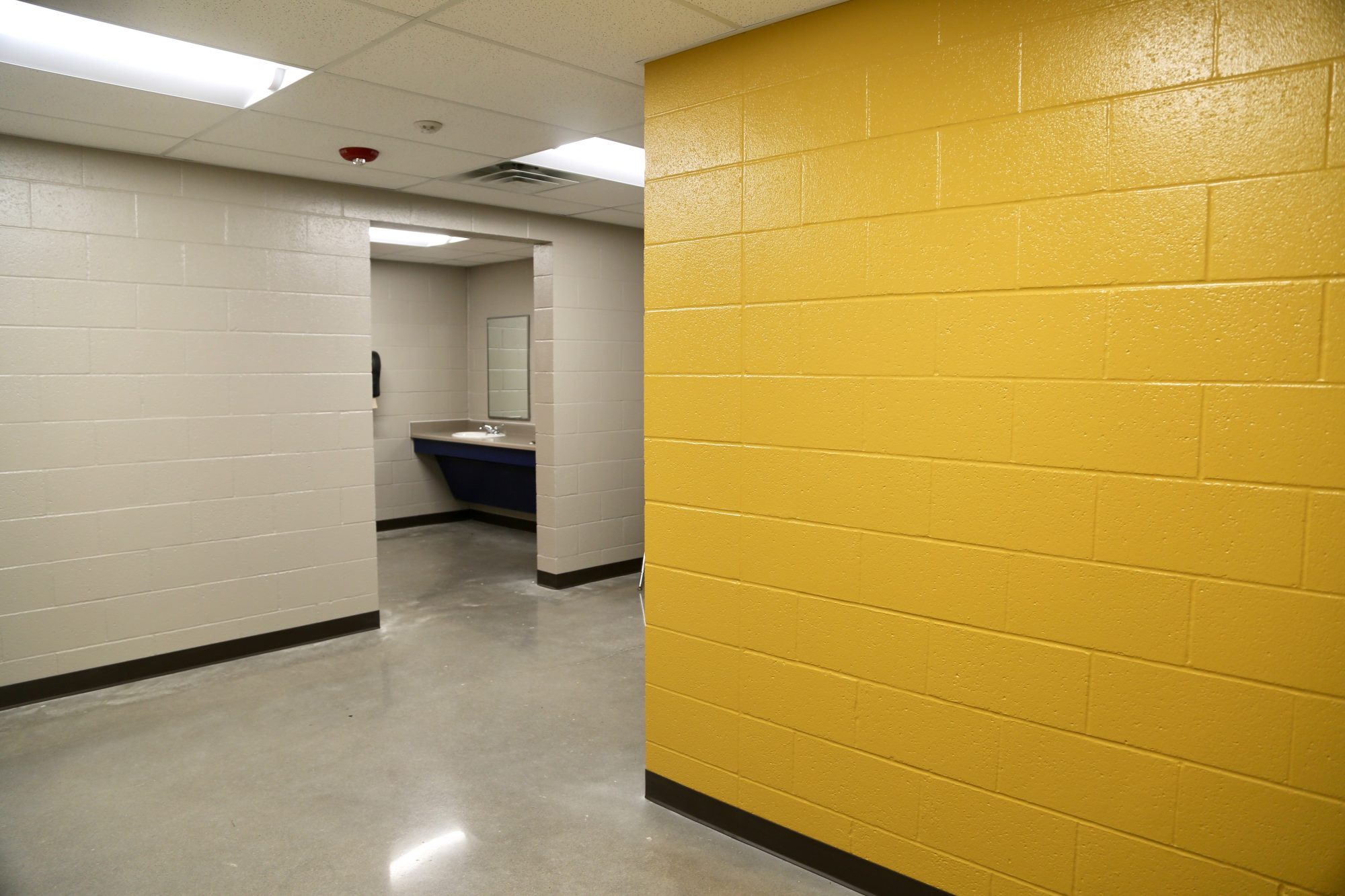 Dressing Rooms, adjacent to the Gymnasium, also double as a safe area with structure designed for 250 mile per hour winds 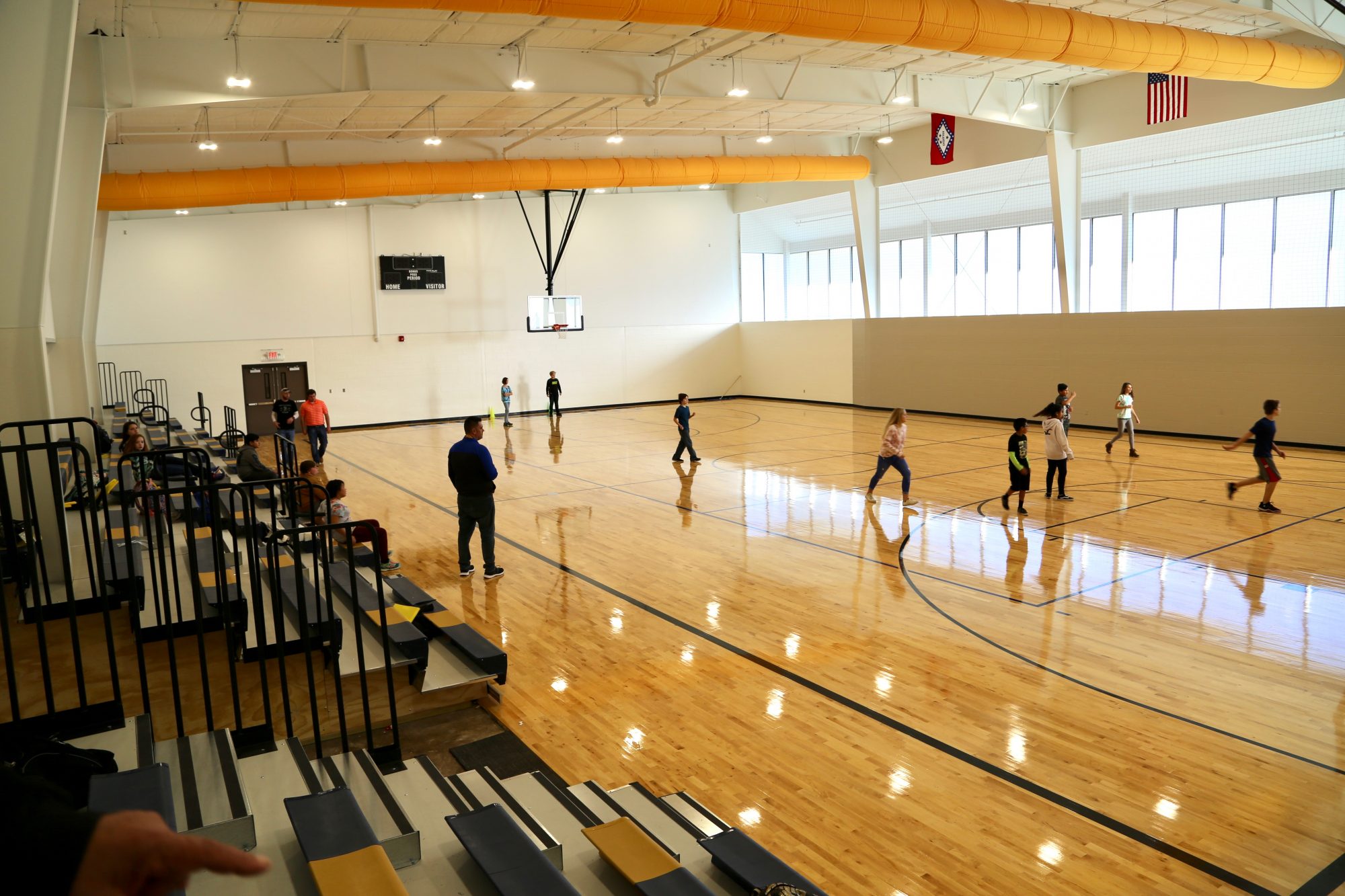 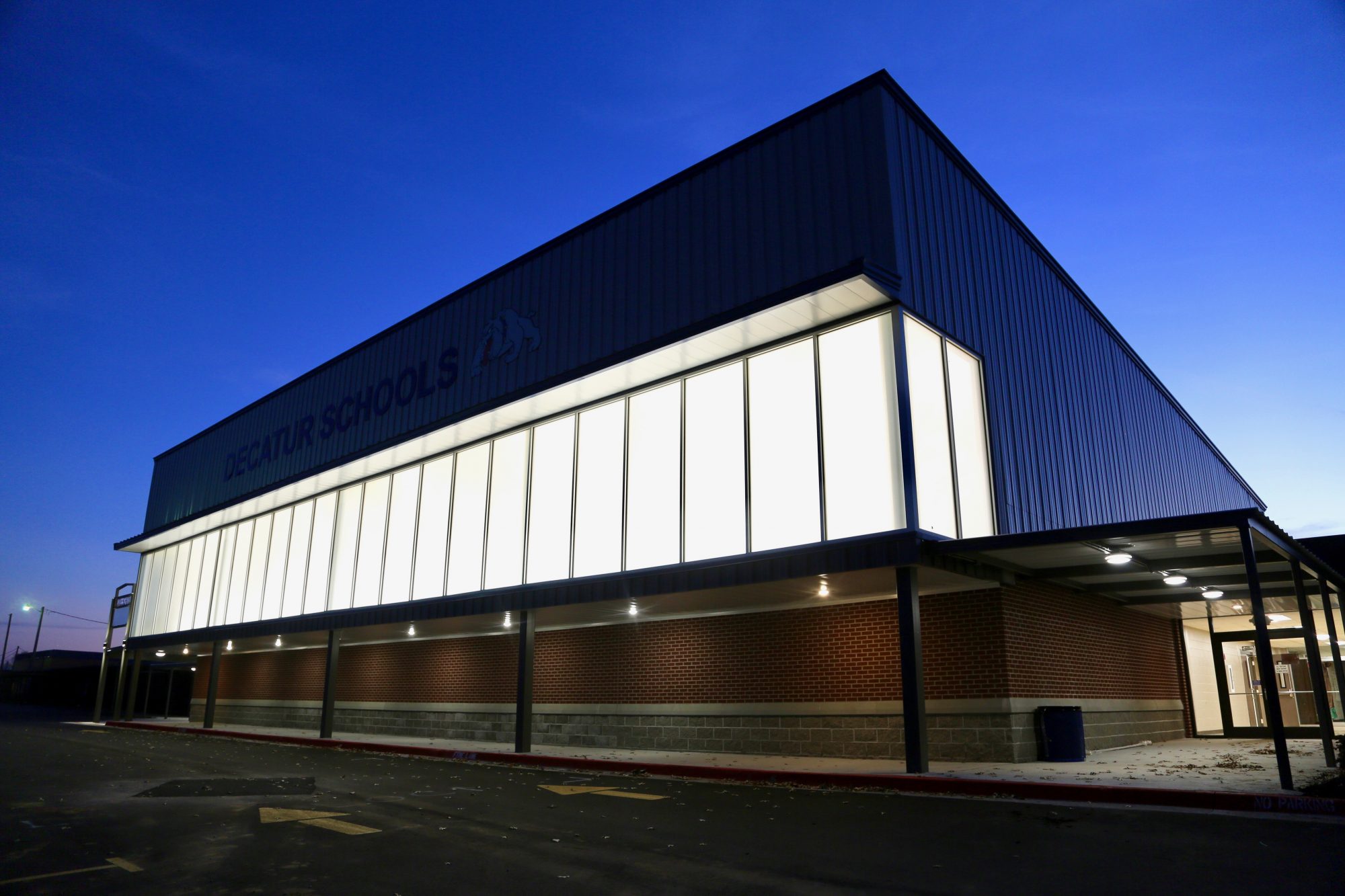 The roof of the Gymnasium is sloped to the back, simplifying the roof structure and making a bolder statement to the Community and passers-by, from busy State Highway 102